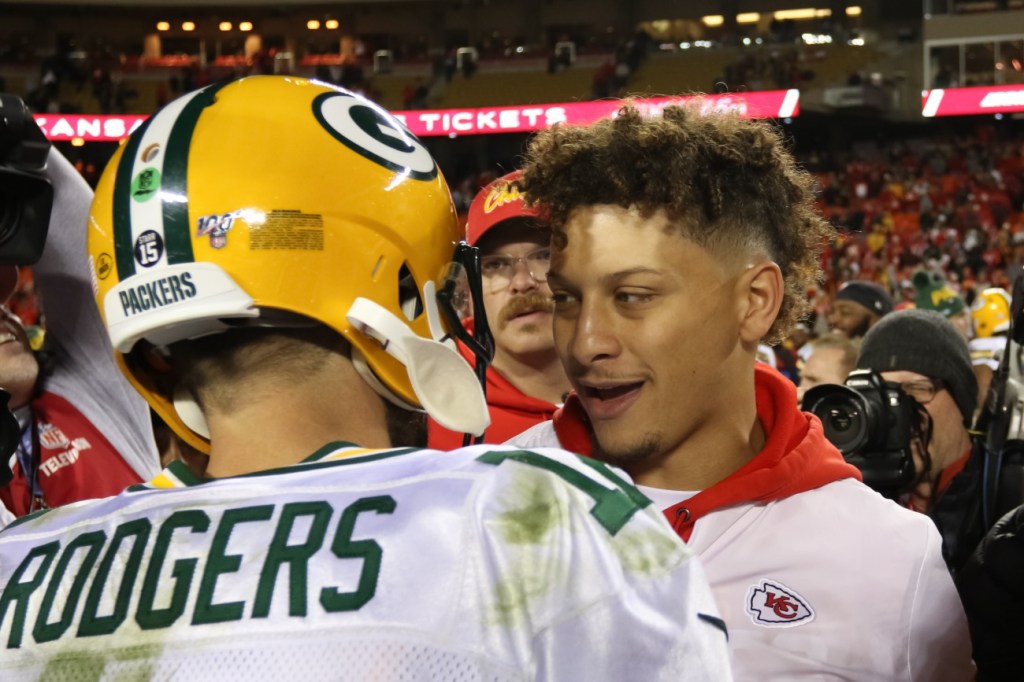 When it comes to the NFL MVP conversation, two names that are in the mix every year now are Patrick Mahomes and Aaron Rodgers. They are currently 2nd and 4th in the Vegas odds to win MVP, +750 for Mahomes and +850 for Rodgers.

But their journey to a potential 2022 NFL MVP award couldn’t be any different, at least based on recent comments from Patrick Mahomes and the career history of Aaron Rodgers. Shortly after the conclusion of the Super Bowl back in February, long-time Green Bay Packers beat writer Bob McGinn, a guy who knows Aaron Rodgers’ playing style better than 99.99% of the NFL world, issued a scathing indictment of how Aaron Rodgers plays it safe.

Patrick Mahomes’ Comments About His New Approach To Winning

Patrick Mahomes on what he learned from the 1st half of the AFC Championship Game loss:

“It’s just that you find a way to succeed. The second half of that game: I don’t want to say we relaxed, but I mean when you lead like you did, you want to make sure you win the game, but you don’t want to play like you’re playing not to lose. And I feel like that’s what we did.”

“As a team, we were playing not to lose, we were playing just to get to the Super Bowl. If you look, they didn’t do much different from the first half to the second half. We just didn’t execute at a high enough level. They were playing the same coverages and we weren’t executing. Then momentum gets in the other team’s favor and when you’re playing a good football team, bad stuff happens.”

“What I’m working on now is finishing practice. If it’s going good or bad, make sure you finish practice the right way. Get every rep out of it and keep pushing guys to do that. … You get to a point where there’s some days when you have these long days or practices that are going well, people relax and you just kinda keep going. Well, I want to make sure that we have that same intensity at the end we do at the beginning. I think that’s something you can work on every single day.”

The gist here is simple, Patrick Mahomes wants to win. He won’t be playing it safe in situations where teams could get back into the game. Sure, if they’re up by 40 then Andy Reid might take him out but ‘playing not to lose’ is no longer in the Mahomes Playbook.

How does the ‘playing not to lose’ comment compare to the MVP-style of Aaron Rodgers?

Aaron Rodgers is one of the greatest quarterbacks in NFL history. He’s just won back-to-back NFL MVP awards and his 4th in 11 years. But many people believe Aaron has a tendency to play it too safe and avoid making costly mistakes in situations where he needs to open up his game and take chances.

Here is what long-time Green Bay Packers beat writer Bob McGinn had to say about Aaron back in February:

“Rodgers … for years has played a careful, calculating game understanding that number of interceptions plays a disproportionate, nonsensical role in the passer-rating formula. Bad interceptions are, well, bad. Then there are interceptions that are the cost of doing business for unselfish, competitive, stats-immune quarterbacks battling to make plays and lead comebacks until the bitter end.”

“When a quarterback, especially one with a powerful, usually accurate arm like Rodgers, deliberately minimizes chances to deliver a big play for fear of an interception … that’s just hurting his team. In the playoff game, a modest talent like Jimmy Garoppolo was under every bit as much pass-rush pressure as Rodgers but drilled more tight-window completions down the field largely because he wasn’t afraid of a pick and the moment.” (via)

At that time, I pulled together some Twitter reactions from Packers fans who were revved up by that quote. But it’s worth noting Rodgers’ final throw of the season was tossing it up high to Adams in double coverage and that was the end of it. Too little, too late.

Given the choice between Aaron Rodgers and Patrick Mahomes (in their primes) at quarterback I think most reasonable NFL fans would take Rodgers given his experience and longevity. But it will be interesting to see if Patrick Mahomes can stick to his plan to not fall into the ‘playing not to win’ trap and if Aaron Rodgers sticks with his MVP winning ways that have only led to 1 Super Bowl in his career…

Here’s what fans are saying about the article and recent comments from Patrick Mahomes:

every article has a new Mahomes stat that makes you realize just how much of an 👽 he is https://t.co/ArPa32CYFV pic.twitter.com/Qej6Tg3IRg

The last half of football we played is a scar that will never go away….but if it makes us breathe fire it was worth it! #ChiefsKingdom https://t.co/YbJTQA5hA1

It's tough to revisit the AFC championship game. But if Mahomes can do it then I can too. 💪

Patrick Mahomes and the Kansas City Chiefs are currently 3rd in Vegas odds to win the Super Bowl (+1000). It’s going to be a fun season ahead!