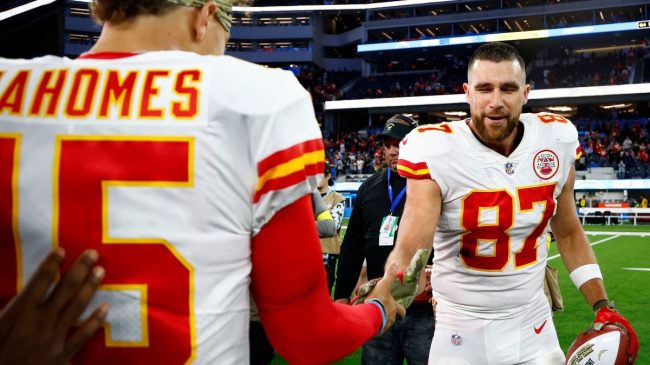 The Kansas City Chiefs are running away with the AFC West after everyone believed this division would be the most competitive in the league. Patrick Mahomes and Travis Kelce put on another clinic to defeat the Los Angeles Chargers. After the game, Mahomes couldn’t help but put Kelce into GOAT status.

According to Ari Meirov, the Chiefs quarterback stated point blank, “He’s the greatest tight end of all time.” Travis Kelce reeled in three touchdowns along with 115 receiving yards. The Chargers had no answers for him or Patrick Mahomes.

Patrick Mahomes on Travis Kelce: “He’s the greatest tight end of all time.”

Now, some may want to argue with Mahomes about who the greatest tight end in the game is. However, Kelce’s track record is wildly impressive. Not only is the Chiefs’ tight end having a career year, but he’s also now had more 100+ yard games than any tight end ever, per Field Yates.

Travis Kelce is up to 11 receiving TD this season, already tied for most in his career in a season.

He’s on pace for a career-high in catches, yards and TD this season at age 33.

And he now has 33 games with 100+ yards, more than any other TE in NFL history. pic.twitter.com/ltuzaZcHif

At 33 years old you’d think Kelce would begin to slow down. Instead, he’s been Patrick Mahomes’ most vital weapon. Additionally, he’s playing so well, it’s hard to imagine his play decreasing anytime soon.

Look for Travis Kelce and Patrick Mahomes to continue lighting it up, as the Chiefs still look like the team to beat in the NFL this season.