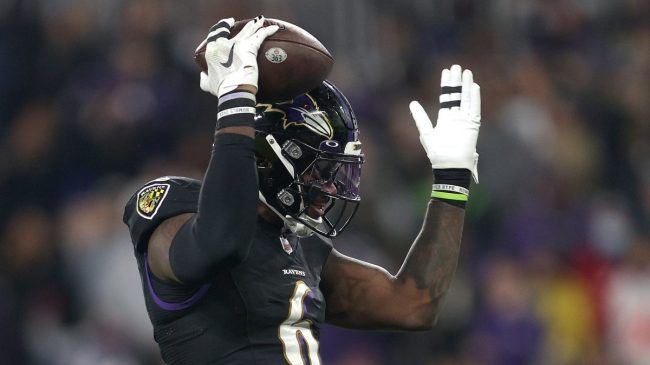 There is no love lost between the Baltimore Ravens and the New England Patriots. The pair have been two of the premier organizations in the NFL for the better part of the last two decades.

That hatred was evidenced in Baltimore’s 37-26 win over New England in Foxboro on Sunday.

The game was chippy throughout and reached a boiling point when second-year Patriots QB Mac Jones left the game after a hit that left him screaming in pain.

Jones did not return to the game and the incident all but ended any hope of a New England comeback. But it appears that the Ravens have little sympathy for the Alabama product.

Jones struggled mightily before being injured against the Ravens. He completed 22-of-32 passes for 321 yards, but none of those passes were touchdowns and three were interceptions.

He was, however, doing enough to get under the skin of Baltimore Ravens players and fans.

this Mac Jones fella… getting on my last nerve lmaooo

Now it turns out that it may not have simply been his play that was bothering Ravens players. Baltimore linebacker Patrick Queen took to Twitter after the game on Sunday night to air some grievances about what Jones may have said to him during the contest.

Shoulda heard what he told me… https://t.co/NXs2rDgmoz

The open-ended nature of Queen’s tweet immediately led fans to speculate what he was talking about. And almost everybody seemed to suggest it was racial in nature.

Though others weren’t happy with the way Queen refused to say what actually was said.

I always love the hint of an accusation of racism. Like say he said something or shut up

Lmao dudes capping for attention. No wonder bro tryna act mysterious instead of just saying it 🤡

Queen never clarified what Jones allegedly said to him. This leaves it up to speculation from fans. That speculation is typically worse than the actual reality of the matter.

Whatever it was, we doubt Queen and Jones will be exchanging Christmas cards anytime soon.