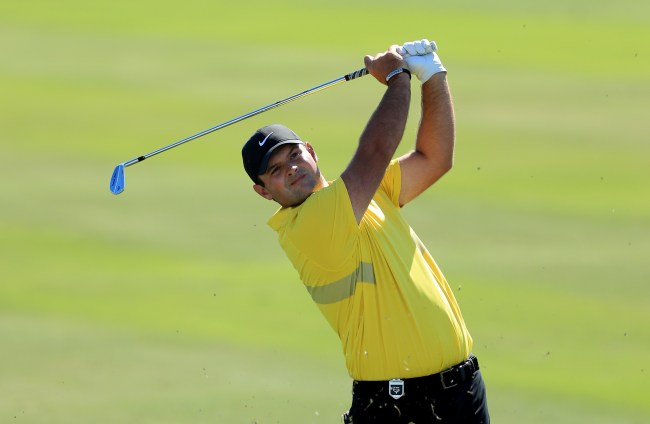 Patrick Reed came into the third round of the Hero World Challenge holding a two-stroke lead over Gary Woodland. After playing the first two rounds at six-under par each day, Reed has struggled mightily to get anything going in the third round. Through his first 13 holes, Reed did not record a single birdie. But he did manage to improve his lie in a waste bunker while the camera was rolling.

One could argue from the video below that Patrick Reed improved his lie unintentionally, but one could only do that if one’s name was Justine Reed. Because that is how blatantly obvious it is.

Candidly, I think waste bunkers are far too penal. No one grooms them, people walk in them and the lies you can get could be completely man made. A footprint shouldn’t ruin your round. That said, the rules are the rules and you have to know that the camera is going to be on all of your shots when you are leading the golf tournament. No matter how rough of a day he is having, it’s just pure stupidity on Reed’s part to even attempt this when leading.

What might not come as a shock to you is that this isn’t the first time Patrick Reed has done this.

For all you rules gurus out there… What is Patrick Reed doing here in the waste bunker? #WhatsTheRule? pic.twitter.com/XES2KY6XaD

Since the rules of waste bunkers are one, big gigantic gray area, Reed isn’t the first player to improve his lie in a waste bunker this. If you recall Matt Kuchar went out of his way to hand pick sand from behind his ball to improve his lie. Hopefully the PGA Tour’s rules officials do the right thing here and make an example out of Reed.

If you think about it, penalizing Reed for blatantly improving his lie is a win-win for the Tour. They get to put their foot down while also putting it up the ass of the least liked player on Tour.

UPDATE: The PGA Tour issued a two-stroke penalty on Reed after his round.