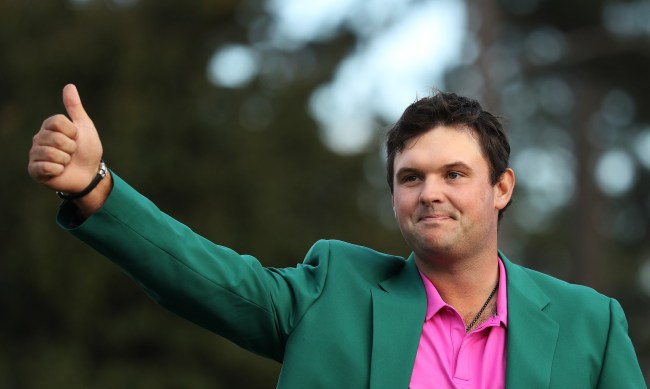 Patrick Reed won the Masters Tournament on Sunday without an equipment sponsor, using “14 golf clubs and a golf ball that I feel are the perfect fit for me.” Reed, who played the previous 5 seasons under contract with Callaway Golf, carried a “mixed bag” containing Ping, Titleist and Callaway irons, Artisan Golf wedges and an Odyssey putter; he used Titleist’s Pro V1 balls. While Reed does not have an equipment sponsor, rare for a major winner, he was outfitted by Nike; though not in his traditional red (see Fan Marino below).

Howie Long-Short: Of the 5 brands that Reed had in his bag, Callaway (ELY), Titleist (GOLF) and Odyssey (ELY) are publicly traded. Ping is a privately held operation, run by the Solheim family; Karsten Solheim founded the company in 1959. Artison Golf is a newly formed company (late ’17), founded by a group of old Nike Golf clubmakers; including master clubmaker Mike Taylor.

Fan Marino: Despite being the leader going into Sunday’s final round, Nike would not allow Patrick Reed to wear the red shirt with black pants (and black hat) that he typically wears on Sundays. Reed, who wears red as an ode to his idol Tiger Woods, won his 6th tour championship while wearing a pink shirt. Nike maintains that the decision was not related to Woods presence (never in contention) and that there is a new policy to keep the brand’s golfers in “the same kind of storyline” (presumably for easier recognition); but, Woods showed up in his customary red on Sunday finishing T-32nd (+1). There is no word on if Woods was violating company policy or Nike maintains an exemption for Tiger.

There has been a lot of activity within the OTT & MVPD space over the last 30 days. Among the headlines; ESPN announced the April 12th debut of ESPN+, Turner introduced B/R Live and Endeavor acquired NeuLion. To help us gain some perspective on the sports media rights landscape is Dan Cohen, Octagon SVP, Global Media Rights Consulting Division. In Part 1 of a 2 Part interview, Dan projects what the media landscape is likely to look like in 5 years and suggests who ESPN should be targeting with their OTT service, ESPN+.

JWS: In the last several months, just about every major TV network launched an OTT service. If the consumer is forced to buy multiple bundles to acquire the various networks they watch, isn’t this just the newest iteration of the cable bundle?

Dan: Yes, is the short answer. I think we’re a little bit away from that and I wouldn’t necessarily say that every U.S. based media company is going about it the same way from a strategy and content perspective. For example, NBC is going very sport specific with NBC Sports Gold (think: soccer or cycling), where they have an anchor property like English Premier League or Tour de France; whereas ESPN+ is really going to be aggregated multi-sport non-linear distributed content, coupled with original programming.

JWS: How far are we away from the “tipping point”, when it is no longer cost-effective for the consumer to acquire programming on an ala carte basis?

Dan: In the next 3-5 years, the dollar cost to having these standalone subscriptions will start to outweigh the original cable bundle for $100/mo. You’ve got the leagues going direct to consumer, they’re also selling broadcast rights to companies like Amazon and Yahoo! and you’re going to have content distributed digitally through these MVPD’s; which I would argue is too crowded a space. So, you’ll have a Netflix subscription, an Amazon Prime account, HBO Go, NFL Game Pass and MLB At-Bat, in addition to your internet bill; and at that point, you’re probably spending close to what your cable bundle costs right now and not getting everything that you had before.

JWS: So, where does that leave this collection of league/network OTT services and MVPDs in 5 years?

Dan: I think you’ll see a lot of M&A activity within the OTT space, either from a technology platform perspective as we’ve seen with NeuLion, BAMTech and Deltatre or from the multitude of content distributors now readily available (think: Hulu, Fubo TV). You’re also going to see some of these other content rights holders either fall by the wayside or get gobbled up by a larger media distributor looking to grow subscriptions, acquire larger content libraries, or enhance their technology offerings.

Howie Long-Short: Not familiar with Octagon? It’s the world’s largest sports & entertainment agency with 50 offices in 22 countries. Steph Curry, Giannis Antetokounmpo and Felix Hernandez are among the athletes the firm represents; while BMW, Budweiser and Mastercard are listed among their brand clients.

The company is a subsidiary of the publicly traded Interpublic Group (IPG), a collection of advertising agencies and marketing services companies; and component of the S&P 500. In early February, IPG released Q4 revenue +3.3% (to $2.34 billion) and FY17 revenue +1.8% (to $7.88 billion) figures and noted that the company’s operating margin grew +40 basis points (to 12.4%) in 2017. IPG also reported a 17% YoY increase in the Q4 dividend paid (to $.21) and announced the authorization of a new $300 million repurchase program; actions that “reflect our continuing operating success and financial strength”. Since ’11, the company has returned $3.6 billion to shareholders in the form of dividends and repurchases. IPG, which hopes to grow organic revenue 2-3% in ’18, will report Q1 ‘18 earnings on the morning of April 27th.

Fan Marino: As noted here just a weeks ago, I’m having difficulty grasping who the ESPN+ service, as currently constructed, appeals to. Sports fans have favorite teams and watch their teams’ games, gamblers pay for services (think: NBA League Pass, NFL Season Ticket) that provide them with access to all the action and anyone willing to cut the cord (and drop ESPN), isn’t adding a package meant to be complimentary. I asked Dan, who is ESPN targeting with this service?

Dan: There are two groups; the millennial digital and mobile first segment of the population and the next generation of cord cutters or cord nevers. If I’m them, I would be targeting the 28-40-year-old parents that are cutting the cord, have kids that are still screaming for sports content and aren’t necessarily into sports. At $4.99/mo. it provides them with a less expensive entry point for live sports content.