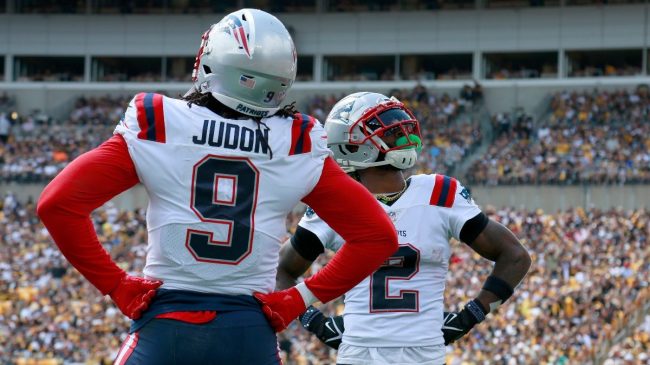 The New England Patriots put up a valiant effort against the Green Bay Packers. Although they were down to their third-string quarterback, Bailey Zappe stepped up in a big way to keep the team in the fight. In the end, it wasn’t enough to overcome Aaron Rodgers. Despite the fact New England deserves praise for playing so well, linebacker Matthew Judon hums a different tune.

According to The Athletic NFL, Judon isn’t satisfied with “moral victories.” Wins are the only thing that matter in the NFL, whether you like it or not. “There ain’t no moral victories. We want to win. The only good comes with a W.” Although the Patriots competed well against the Packers, Matthew Judon certainly makes a good point.

The Patriots took a four-time MVP to overtime with a third-string quarterback, in Lambeau Field.

At the end of the day, New England walked out of Green Bay with a loss. They’ve now fallen 1-3 on the season, putting them in last place in the AFC East. The franchise could find itself in a whirlwind of trouble with another loss. Matthew Judon clearly has that in mind moving forward.

The Patriots have plenty to prove still. Despite the fact Bailey Zappe filled in nicely, the offense must get the ball rolling. The defense looked solid on Sunday, as they frustrated Aaron Rodgers and the Packers throughout most of the matchup.

New England will have a chance to get back in the win column in Week 5. They’re set to make a homestand against the Detroit Lions. Between Detroit’s surprisingly electric offense and the Patriots’ shutdown defense, we could be in store for a fun contest.