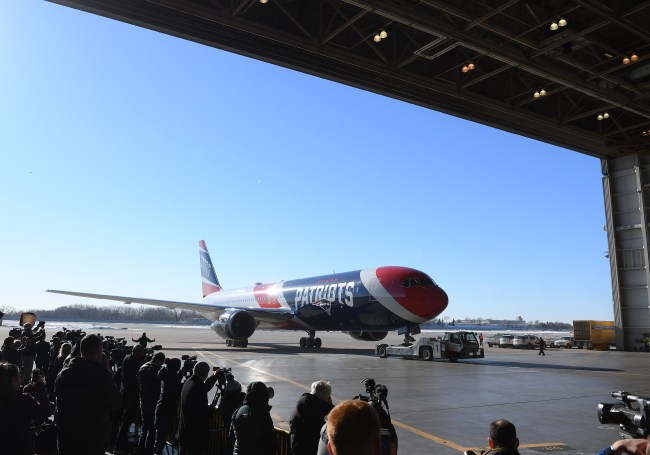 The New England Patriots organization made this holiday season even better for the Navy Midshipmen Football Team by loaning the team a private plane so they could fly to their December 31st bowl game.

To cap off a spectacular 10-2 season (6-0 at home), Navy Football will face Kansas State in the Liberty Bowl on December 31st in Memphis, Tennessee. And to get there they’ll be flying on a private jet courtesy of owner Robert Kraft who purchased two team places for $10 million apiece for the New England Patriots organization just two years ago.

The private plane is splashed in a custom New England Patriots paint job and the Navy Football team shared news that they’d be flying on this sick plane on their social media this week. Both Navy and Kansas State are 9-3 against the spread this season and the Midshipmen are 2.5-point favorites in their bowl game.

. @NavyFB traveling to the @AZOLibertyBowl in STYLE. Thank you @Patriots pic.twitter.com/kDxXlc0t7X

You know the @Patriots hold it down for #TheBrotherhood! #NavyFB | #BuiltDifferent pic.twitter.com/AIMfwjt2KC

I have to imagine this is the first time most of these players have had the opportunity to fly on a private plane and that experience wouldn’t have been possible without the New England Patriots and their owner Robert Kraft. Kraft was a Columbia undergrad + Harvard MBA guy so it might seem strange that he’d offer this gift to the midshipmen but the relationship is actually from the Belichick according to CBS Sports:

While it may seem like an odd relationship, Bill Belichick’s father actually has a close connection to the Naval Academy. Steve Belichick served as a scout for the Midshipmen for over 30 years in addition to being a backfield coach.

In addition to the Belichick connection, current Patriots long snapper Joe Cardona attended the Naval Academy and the franchise selected him in the fifth round of the 2015 NFL Draft.

All things considered, it’s really not that far of a trip from Annapolis to Memphis for the Bowl Game but it is pretty funny that this private plane likely had to come down from Boston to Baltimore before making the trip to Memphis and then back again.