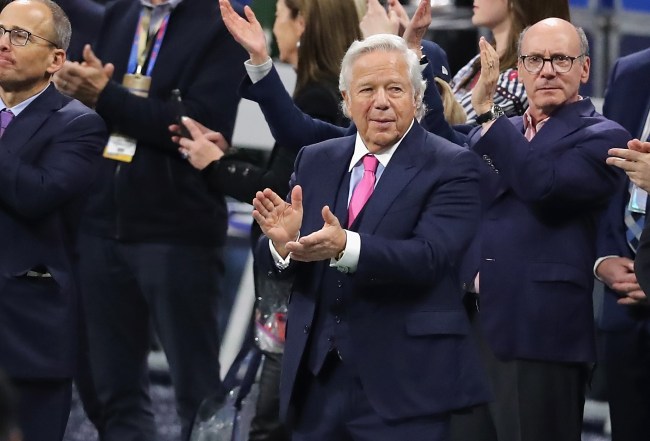 Weeks after celebrating the Pats Super Bowl win in Atlant the team’s owner Robert Kraft appears to be caught up in a bit of legal trouble after Jupiter police issued a warrant for his arrest claiming that he was a regular at a prositution “spa”.

New England Patriots owner Robert Kraft has been named by police as a person involved in a recent prostitution, human trafficking sting operation in Jupiter, Florida.

Multiple law enforcement agencies were involved in the operation — including Homeland Security, the IRS, the Jupiter P.D., Palm Beach Sheriff’s Office and more.

Officials say the women accused of running the sex trafficking ring operated out of local spas which touted themselves as massage parlors.

Apparently Kraft was spotted on video several times at the spa in question.

Investigators claim Kraft was a regular visitor to the Orchid Spa and that there is video of Bob Kraft inside the "spa." @CBSMiami

There's really one and only one thing that is relevant or significant in this Robert Kraft story. pic.twitter.com/iXkpW0ZUTv

Update: Kraft’s spokesman as issued a statement denying the allegations.

Robert Kraft's spokesman: “We categorically deny that Mr. Kraft engaged in any illegal activity. Because it is a judicial matter, we will not be commenting further.” https://t.co/twzJ8dCv3l

Of course the Internet had a field day with the Kraft news.

Robert Kraft walking into the spa with $100 and Viagra pills pic.twitter.com/cFR3hDkF1d

Robert Kraft is worth over $6 billion and he’s trying to solicit prostitutes at a discount massage parlor? Most sauceless dynasty in the history of sports lmao pic.twitter.com/nBv50MxnSc

Live look at the NFL world reacting to the Robert Kraft news pic.twitter.com/lhaQwVKy6g

They making it haaaaard out here for a playa 😳 #RobertKraft

Me @ this Robert Kraft headline pic.twitter.com/mirwukqqbV