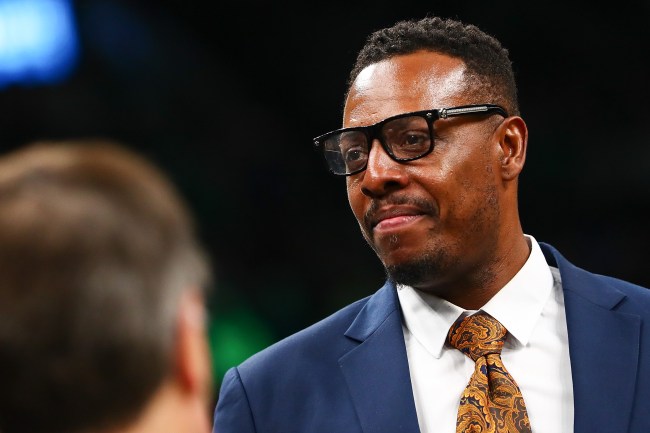 Paul Pierce appeared to have himself a good time on Friday night.

Pierce, who currently works for ESPN as an analyst, jumped on IG live to do a “demon time” stream filled with strippers twerking in the background while Pierce and his buddies sat around playing poker and throwing chips at the women dancing. (We’re not posting any of the videos here but you can find it on Twitter with just a quick search.) 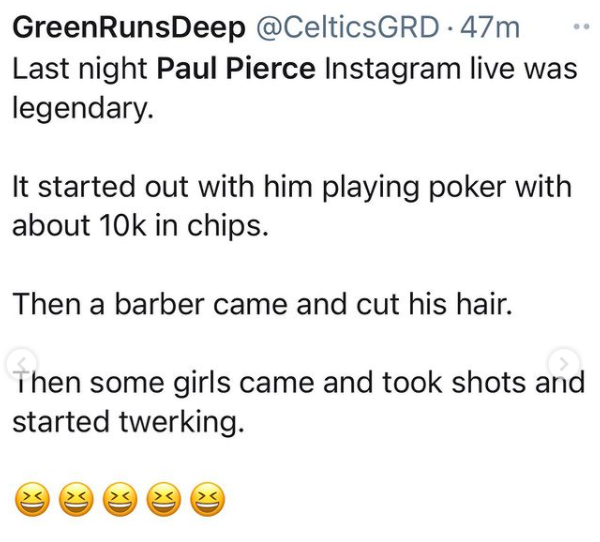 Fans thought it was hilarious Pierce would put up such a wild stream considering he’s currently employed by Disney.

Paul Pierce requesting an escort to 315 viewers on IG Live, I fuck with the vision even though he’s about to be in the ESPN gulag.

Paul Pierce took all their phones made them sign NDA’s then went on IG live, unreal

Paul pierce when he’s in the zoom meeting with the ESPN tomorrow morning pic.twitter.com/NmXOCEBzlX

Paul Pierce trying to get Into espn after his live pic.twitter.com/ugZHk8Emas

ESPN when they see them Paul Pierce videos… pic.twitter.com/WAHwsx0n2p

ESPN execs waking up to see why Paul Pierce is trending 😂😂 pic.twitter.com/i2Dd53wNsM

Paul Pierce works for Disney & got strippers on his IG Live. 😂😂😂😂 pic.twitter.com/CbM2m4HweC

Sleep schedule is all over the place, but at least I know what it was like to see those Paul Pierce videos while he was technically still an ESPN employee

ESPN when Paul Pierce walk through the door: pic.twitter.com/iXOe0RXmA4

Paul Pierce explaining to ESPN what really happened on his IG Live pic.twitter.com/epKwVZOq2e