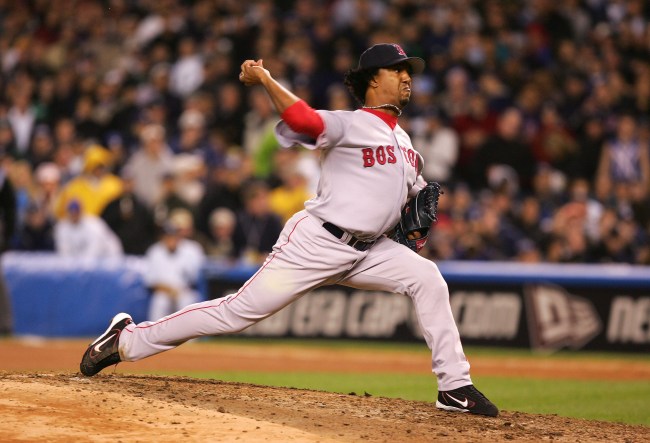 When the Red Sox went down 0-3 against the New York Yankees in the 2004 American League Championship Series there wasn’t a reasonable person alive, who didn’t play/work for the Red Sox, that thought Boston could come back and win the series. At that point, no team in baseball had ever come back from being down 0-3 to win a 7-game series…but why not them?

That comeback was so improbable they literally had to go back and rewrite the movie Fever Pitch with Jimmy Fallon because everyone assumed the Sox would take a dump in their pants in the playoffs, like they did every year for the past century at that point, because of the ‘Curse of the Great Bambino.’

But the Red Sox did comeback, win the series in 7 games after ripping the souls out Yankees fans everywhere, and then they cruised to their first World Series title in 86 years. And according to ’04 ace pitcher Pedro Martinez, it all started in the locker room by passing around this boozy homemade concoction.

Initially, it was said the Red Sox players were passing around Jack Danielsin the locker room and ripping shots each game but Pedro says that wasn’t the case at all.

The way Pedro Martinez aka El Grandé tells it in a video that Bleacher Report posted yesterday but deleted after I hit publish on this article, there was an empty bottle of Mama Juana in Manny Ramirez’s locker room. Mama Juana is a popular Dominican drink made of rum, red wine, and honey that sits in a bottle with tree bark and herbs. If you had to compare the flavor to something it wouldn’t be terribly far off from a Port Wine or Madeira.

I’m no expert but the Wiki entry for this concoction has the positive effects listed as everything from a ‘flu remedy to a digestion and circulation aid, blood cleanser, sexual potency, kidney and liver tonic.’ Basically, it’s delicious alcoholic snake oil.

In the deleted Bleacher Report video, they got Pedro Martinez to tell his story of the Mama Juana sparking the 2004 Red Sox ALCS comeback, one of (if not THE) greatest comebacks in sports history…But since that video is no longer on the Internet, here’s a quote from Pedro from a few years back about how it wasn’t Jack Daniels.

‘The Jack Daniels story’ has stuck, but former Sox pitcher Pedro Martinez put a wrinkle in it over the weekend, telling Sports on Earth that the drink of choice for his team of “Idiots” was not Jack Daniels but rather a Dominican drink called Mama Juana. That drink is made by allowing alcohol to soak in a bottle of tree bark and herbs.
“We took a shot of Mama Juana every single game, before the game,” Martinez said in an interview before a legends game in Rochester, N.Y. “We call it Mama Juana — it’s made of roots, with latin rum.”

Martinez’s story differs from the one Millar told in 2004. According to Martinez, the team began taking shots of Mama Juana before Game 4, when Ellis Burks, who was not on the roster, decided to try some. After the team’s thrilling 12-inning win, the Sox kept it up.
“Everybody took a little bit from the top of the shot after we won the first game,” Martinez said in the interview. “Somebody did it before the game — it was Ellis Burks who wasn’t on the roster at the time who took the first shot. And then Millar jumped in. And then Johnny Damon jumped in. And everybody started jumping in, so we did it as a team unity to actually keep the same tradition going for the team. So we had to do it for the four games we beat the Yankees. (via Boston)

This article worked a lot better before that video was deleted in the time it took me to write this up and hit publish but here we are. I figured it was still worth sharing for any Red Sox fans out there who hadn’t heard this story before.