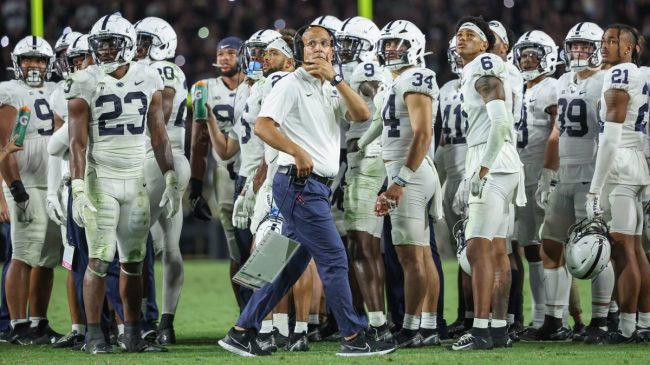 College football officially made its return a week ago. But Thursday’s games between Penn State and Purdue and Pitt and West Virginia in the Backyard Brawl officially kicked things into high gear.

Among all the oddities that the sports presents, there’s one in particular that fans love perhaps more than anything else. Nothing quite registers on the college football fan scale quite like a big fella doing things that big fellas aren’t supposed to do.

And that’s exactly what the Nittany Lions showed off on Thursday night.

But now Nwosu appears to have won the Nittany Lions’ starting job as a kickoff specialist, and fans are taking note of him for all the right reasons.

That’s because Nwosu is an absolute mammoth of a man for the kicker position. At 6-foot-6, 276-pounds, the redshirt freshman would be the largest defensive end on the Penn State roster. And he’s got quite the leg to boot!

Nwosu served as part of a three-man rotation on the kickoff team. He had two kickoffs on his own, including one that went thundering into the end zone for a touchback. He very quickly became a fan favorite.

Largest man i have ever seen. He was booming those kicks https://t.co/NLVltnPHyN

If there’s one things fans love, it’s #CollegeKickers and big fellas. So Nwosu is basically a college football unicorn

Big kickers aren’t anything new to Penn State. In 2015, 5’10, 260-pound kicker Joey Julius handled kickoffs for the Nittany Lions. Julius then unfortunately left the team due to an eating disorder.