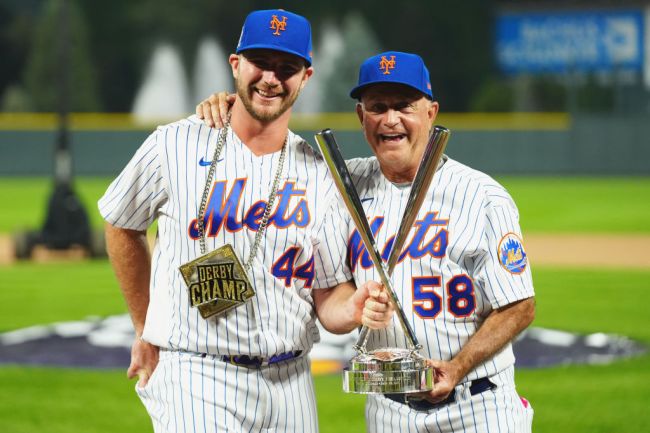 Pete Alonso went back-to-back. While the New York Mets continue to be professional choke artists and the butt of many jokes, the team’s first baseman can’t stop coming in clutch during All-Star weekend.

While it was a great evening for the three-year player from Florida, it was the man throwing to him that stole the show.

The Polar Bear won the 2019 Home Run Derby in Cleveland but was unable to defend his title in 2020 due to COVID-19.

Allotted the opportunity to back his title up in 2021, Alonso put on a show. The 26-year-old slugger recorded 74 home runs in three rounds (totaling over six miles !!!!! in distance) and walked off the championship round.

“I think I’m the best power hitter on the planet,” he said after winning.

Alonso began his night with a record-breaking first round. Josh Hamilton previously held the record for most home runs in a single round with 28 in 2008.

The former Texas Rangers outfielder had the greatest performance in Derby history. After Monday, Alonso is in the mix.

However, in 2008, Hamilton had to wait for his home runs to drop before taking the next pitch. The rules have since changed and Alonso could swing away.

Nevertheless, what he did in the first round was insane.

While 35 dingers is undeniably impressive, it was the man throwing him the balls who stole the show.

Hitters get to choose who throws to them in the Derby and Alonso chose Mets bench coach Dave Jauss. Jauss, at 64 years old, was DIALED in.

“(He) was putting them right in the bread basket,” Alonso said of Jauss.

Even Mets catcher James McCann gave him a shoutout.

Tip of the cap to Dave Jauss. That BP to Pete was unreal! #HRDerby #LGM

Jauss’ remarkable evening continued and Alonso was vibing to his hand-selected playlist all night. Look at him hitting dingers, dancing to Mobb Deep and hyping up the crowd.

Mancini put up 22 home runs in the final round, which is not an insignificant number. The pressure was on Alonso but he stayed as cool as his own toenails. (Polar bear joke, get it?)

After putting up 17 in the regular time, he had one minute to record five more. Jauss kept putting the ball right on the money and Alonso walked it off with six straight BOMBS.

You can see the full final round below, but start at 13:33 to see him count it down for the win.

Alonso will have the chance to three-peat if he chooses to compete next year and if Jauss is still burning them in, he has a great chance.

Give Jauss a Hall of Fame bid as the greatest batting practice pitcher of all-time if he does.