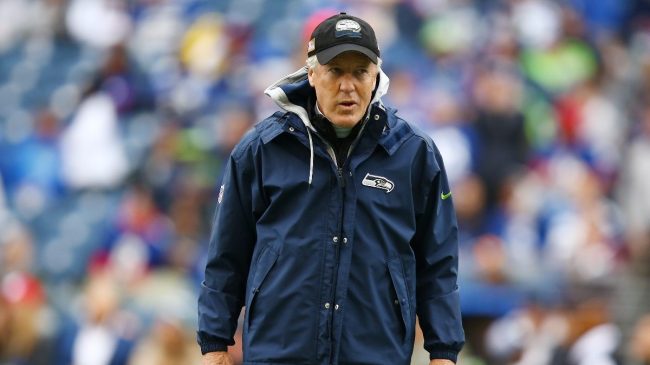 The Seattle Seahawks are surprisingly one of the best teams in the NFL right now. After starting the year 5-3, the franchise is out to prove everyone wrong. Even though we all thought Seattle would be in a downward spiral after trading Russell Wilson, it turns out that Geno Smit is the right quarterback for the job. Now, Pete Carroll sends a message to the haters.

Pete Carroll Has A Message For The Seahawks Haters

After securing a big win over the New York Giants, the Seahawks’ head coach made sure to let the haters know he and his team can still hang. The team is truly thriving after sending Russell Wilson to the Denver Broncos. Meanwhile, Geno Smith has looked like a legitimate starting quarterback. Give a listen to Pete Carroll’s full statement.

Yeah. It’s safe to say Carroll’s been saving the receipts all along. Who would have ever thought that the Seahawks would be in first place in the NFC West entering Week 9 of the regular season? Pete Carroll did! That’s right. And now he’s ready for everyone to apologize, and rightfully so.

The Seahawks’ head coach is definitely excited about his team this year. Not only has Geno Smith been amazing, but all of the new players on the roster have stepped up. Seattle absolutely nailed the NFL Draft and free agency, which has played a large role in their success.

Look for this franchise to keep it going throughout the season. Although the San Francisco 49ers made a massive trade for Christian McCaffrey, the NFC West is a wide-open race.