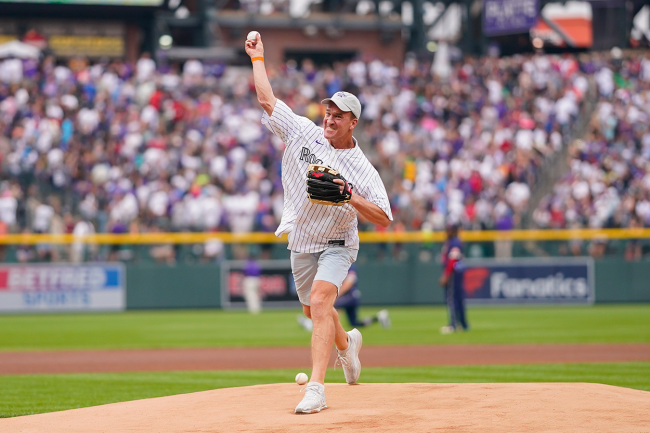 Russell Wilson might be the quarterback of the Denver Broncos, but an alternate universe exists where he plays second base for the Rockies. For just a moment on Thursday, that parallel universe became reality.

Wilson, 33, was a two-sport star in both high school and college. He was drafted in the 41st round of the 2007 MLB Draft but chose to play both football and baseball at N.C. State instead, saying that he actually was leaning toward a pro career but couldn’t turn down a college education..

At that point, Wilson was set out to pursue a career in the MLB and played two seasons of minor league ball with the Colorado organization before going back to finish out his football career at Wisconsin. The Rockies believed he had a legitimate shot at the MLB.

That wasn’t quite the case with Peyton Manning, who played baseball in high school but was always going to play football on the next level. That didn’t stop him from getting his chance to take the diamond in Denver.

One Manning’s best friends at Tennessee, Todd Helton, went on to play for the Rockies. As a result, the Hall of Fame quarterback got the chance to don a Colorado uniform and show off his skills back in the day.

Manning returned to Coors Field alongside Wilson on Thursday and the two suited up in a Rockies uniform and took the diamond together.

While at Coors, both quarterbacks took their turns taking batting practice.

He made some contact but didn’t look particularly natural.

Peyton Manning and Russell Wilson getting in some pregame work this morning pic.twitter.com/lehkJSGZdk

Wilson, on the other hand, looked like the pro that he once was. He was mashing dingers.

Moon Balls. To Coca Cola and back. #Enjoy pic.twitter.com/ApTxZxQ7Pj

Once they got done getting in their hacks, the two moved out to the infield and ran some mock double play balls.

The alternate universe where Peyton Manning flipped double play balls to Russell Wilson is one that is truly incredible to imagine. What an unbelievable infield that would be!