Phil Mickelson Loses His Mind And Pulls A ‘John Daly’ At US Open, Gets Ripped To Shreds By Golf Purists 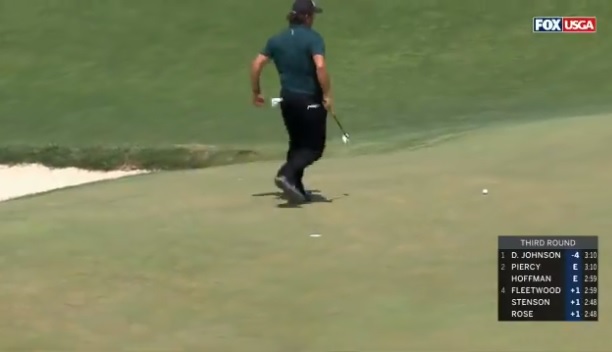 Phil Mickelson lost his mind today and let his emotions get the best of him at the U.S. Open.

On the 13th green at Shinnecock Hills on Saturday, Mickelson’s bogey putt passed the hole and was sliding down a slope when he ran over and swatted it back toward the hole as the ball was still moving, which is a clear two-stroke penalty.

Wow. I've never seen that before.

Phil Mickelson ran after his putt before it stopped, which is a two stroke penalty.

With the penalty, Mickelson was given a quintuple-bogey 9 on the hole. The hole moved Mickelson to an terrible 9 over for the day and put him 15 over for the tournament.

Mickelson’s meltdown is reminiscent of John Daly’s infamous lapse in judgement back in the 1999 US Open in Pinehurst when he swatted a ball rolling down the green.

Of course the golf purists came out of the woodwork to rip Mickelson to shreds.

Phil Mickelson’s misstep at the US Open was the most stunning thing I’ve seen on a golf course since the time Happy Gilmore ripped off a guy’s shirt, punched him so hard that he rolled down a hill and then handed the guy’s shirt to another patron at the 1996 Waterbury Open.

“Welcome friends, and if you’re just joining us, Phil Mickelson has lost his mind.”

Phil Mickelson pulled a move every recreational golfer has during a round.

What the heck did Phil Mickelson just do on the green? I've covered a lot of golf and never seen anything like that. Both ridiculous and, frankly, embarrassing. "He just snapped" is the in-depth analysis offered by the Fox crew.

Phil Mickelson just deliberately hit a moving ball on the green that looked like it was going to roll off the green after his putt. This will be an infamous moment for Phil at the @usopengolf.

Disgraceful move by Phil Mickelson. Embarrassment to the game. Thought he was better than that. Bush league.

Update: After the round was over, Phil was asked about what was going through his mind and here’s how he answered.

Look, I don’t mean disrespect, I know it’s a two-shot penalty. At that time, I didn’t feel like going back and forth and playing that shot over…I’ve had multiple times I was thinking about doing that, and this time I finally did.”