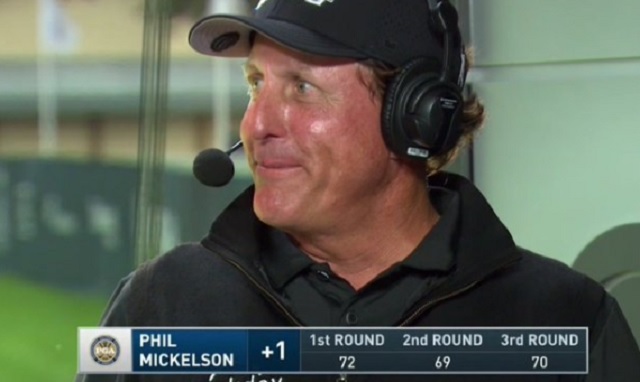 Phil Mickelson is hilarious and definitely has a future in broadcasting whenever he chooses to retire from the game.

During Saturday’s broadcast of the PGA Championship, Mickelson found himself in a hilariously awkward exchange with Nick Faldo, who was oblivious to the fact that Phil was dropping a sex joke on air.

Phil Mickelson: “There are three things I do well: Play golf and talk golf.”

Faldo: “What’s the third then?”

Here’s the exchange between Faldo and Mickelson.

Phil Mickelson dropping in for some analysis this afternoon; Nick Faldo wasn't quite ready for his opening dad joke pic.twitter.com/tNycbpWCeL

Not sure I’ve ever seen Nick Faldo and Jim Nantz momentarily speechless.

Phil Mickelson with… uh… quite the moment in the booth.

“Use your imagination” – Nantz to Faldo 😂