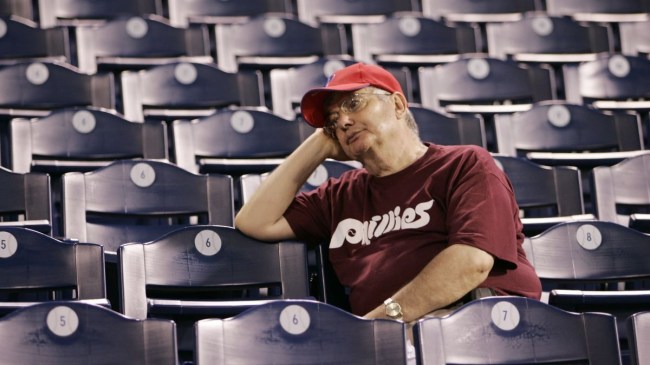 Let’s be honest here. Sports are almost exclusively bad. Sometimes they are good, and sometimes they fool you into believing that they’re good. But in the end, 9 out of 10 sports experiences end poorly.

It’s almost like trying to pass a kidney stone, but if the kidney stone were buried deep down in your soul. Philadelphia sports teams don’t just lose. They lose in the most excruciating ways possible (hello, Kawhi Leonard) and at the most painful times possible (what’s Michael Leighton up to these days?).

But thankfully for Philadelphia sports fans, the US sporting calendar has always been laid out in a way so that this pain is spread out over the course of the year. It always allows you the proper time to recover and trick yourself into again thinking that sports could ever possibly end well (what an idiot, am I right?!).

That is, until Saturday.

The cool thing about Philadelphia sports fans is that they will cling to ANYTHING Philadelphia-related (lookin’ at you, Villanova). That includes their local MLS team, the Philadelphia Union.

After some late calamity and a red card to LAFC, Philadelphia took a 3-2 lead with just minutes remaining in extra time. All they had to do was see the match out, with a man advantage, and they’d win their first MLS Cup.

Instead, LAFC superstar Gareth Bale scored a backbreaking late goal to send the match to penalty kicks. The result was never in doubt from there. Philadelphia missed all five penalty kicks (with former Union backup and Philadelphia native John McCarthy in goal for LAFC!) and LAFC lifted the MLS Cup.

Not hours later, the Philadelphia Phillies took a 1-0 lead on the Houston Astros in Game 6 of the World Series. Phillies ace Zack Wheeler was dealing. But manager Rob Thomson pulled Wheeler from the game with runners on the corners and one out in the sixth inning after just 70 pitches. Reliever Jose Alvarado then gave up a three-run home run to Yordan Alvarez. The Phillies never recovered and Houston won the game, 4-1, and took the series, 4-2.

It marked the first time in history that any US city lost two major championships in the same day according to Elias Sports Bureau.

The city of brotherly love is the first city ever to lose two pro sports championships on the same day. pic.twitter.com/jMqUGDkqiQ

Because it’s not always sunny in Philadelphia, friends. It’s more cloudy with a chance of meatballs. Except the meatballs are actually made out of cement.