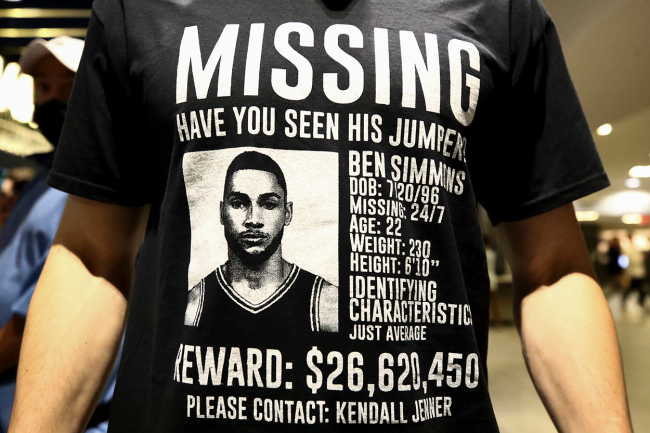 Philadelphia sports fans never fail to be amongst the most entertaining in all of sports. That was in full display last week.

A fan named James called into 94 WIP sports radio on Friday and wanted to share his opinion on the Ben Simmons situation. If you have not heard about what is going on with the 76ers point guard by now, you can catch up here.

Essentially, he does not want to play for the team, has been incredibly vocal about his desire to be traded and reluctantly showed up to practice just a few days before the season. Most recently, however, he did not travel with Philadelphia on a six-day road trip.

Well, James had some thoughts about the debacle and nothing was going to stop him from getting them off of his chest. Not even a hit-and-run. Literally.

As Angelo Cataldi and the Morning Team answers James’ call, they ask him how he is doing.

“Oh, not bad,” James said. “Someone just hit my car… and they are driving off, that’s okay.”

You can even hear the contact that the car made with James’ car on the broadcast.

Absolutely baffled by what they were hearing, Cataldi and Rhea Hughes offered suggestions for how to proceed. Hughes suggested that the reader should read the license plate out loud so that they could write it down.

James was not interested. He wanted to talk Simmons.

“They swerved into my lane,” James continued. “Oh well, anyway, I was calling about Ben Simmons.”

“You just got into a car accident, and you’re calling about Ben Simmons?” Cataldi asked in a confused tone.

“Yeah, cuz he annoys me more than someone hitting me with their car and driving off,” James said in response.

From there, James went on a rant about Simmons and his claim of mental health issues. It was astonishing how calm he remained about getting hit in traffic and Cataldi could barely hold the call together.

You can listen to the full audio here: