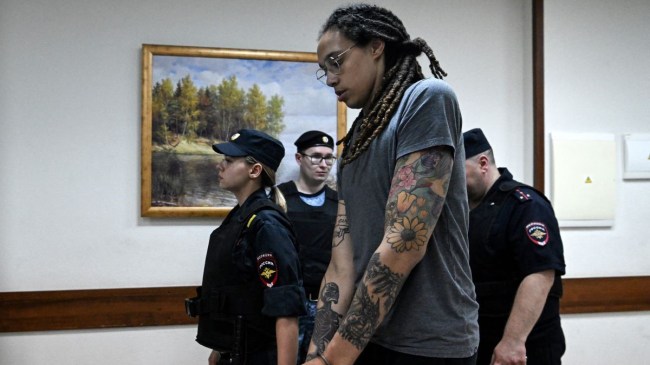 Griner was part of a prisoner swap between the US and Russia involving arms dealer Victor Bout, who was serving a 25-year federal prison sentence and is known informally as the “merchant of death.”

The 32-year-old basketball star had been detained in Russia since February when she was accused of smuggling drugs both in and out of Russia. Her trial did not begin until July and she was quickly convicted and sentenced to nine years in prison. Shortly after, Griner was transferred to Russian penal colony IK-2.

Griner was in Russia playing basketball for UMMC Ekaterinburg. She’s played for the club since 2014. She also plays for the Phoenix Mercury of the WNBA. Though it’s common for WNBA players to play overseas in the WNBA offseason.

She’s an eight-time All-Star for the Phoenix Mercury. The 6-foot-9 center has twice led the WNBA scoring and has led the league in blocks eight times. She helped lead the Mercury to a WNBA title in 2014.

And now the club is happy to have her home safe.

The team first tweeted about Griner’s return with a post shortly after news broke of her release.

They later offered a full statement on Griner’s return.

She’s on her way. pic.twitter.com/A673zRoNLL

“Miraculously, mercifully, the count of days detained has ended at 294, and our friend, our sister is headed back home where she belongs. The emotions for our organization, just like for our fans and so many across the world, are those of joyous celebration, deep gratitude, grief for the time lost, and sincere hope for all families still awaiting the return of a loved one. BG’s strength in this process, her unwavering belief that resolution would come, and the hope she displayed every day is what kept all of us believing this day would come. We are eternally grateful for the combined work of President Biden and Vice President Harris and the Administration, the Special Presidential Envoy for Hostage Affairs, to Cherelle Griner, Ray and Sandra Griner, Brittney’s agent Lindsay Colas, Brittney’s Russian counsel, the WNBA and Commissioner Cathy Engelbert, the WNBA Players Association, and everyone – from players to fans to media – who kept Brittney’s story top-of-mind. The fight to bring her home has illustrated the power of the WNBA, its players, platform, and mission. We no longer have to Bring BG Home – she’s on her way”

We can’t wait for you to be reunited with your wife, Cherelle 💜 pic.twitter.com/0uLmmiqdSS

While her teammates and others across the WNBA also welcomed her home.

our sister BG is home🫶🏼 all praise to God! time to keep praying and fighting for other Americans being wrongfully imprisoned…. the fight isn’t over but we are thankful!