Pittsburgh Steelers Could Be Making A Big Change On Offense 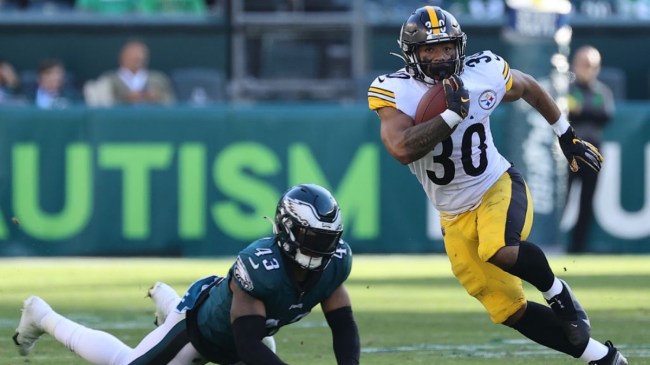 The Pittsburgh Steelers offense has had a lot of issues this season.

Some growing pains at quarterback were expected. Ben Roethlisberger retired after last season and the Steelers brought in Mitch Trubisky and Kenny Pickett to replace him.

Trubisky had struggled during his last stint as a starting quarterback with the Bears and the Steelers got more of the same to start this season. Then they turned to Pickett who hasn’t been much better.

However, while the struggles at QB were somewhat expected, the team was not supposed to have issues at running back.

They came into this year with Najee Harris in his second season after drafting him in Round 1 last year.

Harris posted 1200 yards as a rookie and was supposed to be a key piece of the offense this season. In year 2, he has been bad.

He has run for just 361 yards in 8 games and is averaging a disappointing 3.3 yards per carry.

Now it looks like the Steelers may be ready to give another running back some more touches.

ESPN’s Brooke Pryor revealed that Mike Tomlin has said that Jaylen Warren could get some more touches.

Mike Tomlin asked point blank if Jaylen Warren could be made the featured back:

"He's a quality back that's made some plays. We'll keep giving him an opportunity to do so, and maybe he'll write that script."

The Steelers signed Harris as an undrafted free agent this offseason and he is already making an impression. Warren is averaging 5.3 yards per carry in his rookie season and ran for 50 yards on 6 carries against the Eagles in Week 8.

With the investment the team made in Harris just a year ago, he definitely won’t be supplanted as the starter, but more carries for Warren could be a positive for the Pittsburgh Steelers.

Their offense needs a spark and a more explosive running back getting touches could be that spark.