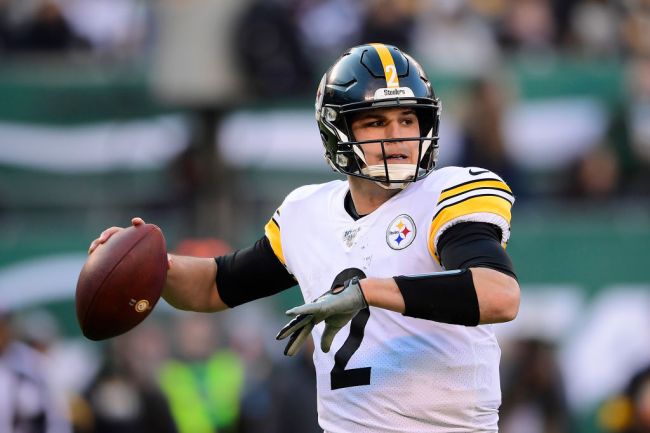 The Pittsburgh Steelers put together an interesting group of quarterbacks as they try to replace Ben Roethlisberger heading into the 2022 season. They signed Mitch Trubisky this offseason. They drafted Kenny Pickett in round 1.

The team’s quarterback competition was expected to just feature those two, but there appears to be a surprising 3rd contender in the race. Yesterday, Steelers offensive coordinator Matt Canada revealed that Mason Rudolph has a shot at winning the starting job.

What OC Matt Canada told us about the QB race & who is very much in it. Another camp fight, maybe a future one between a player & the media. A key WR injured. It's the Up Camp Podcast w Jeff Hathhorn & @JRown32
Check it out at @937theFan #Steelers https://t.co/qhbcPgIzNA

Mason’s getting the second reps right now, almost equal to, maybe slightly less than Mitch. He’s being given a very fair shot. To this point in camp, it might have been exactly equal. Mason has made a lot of plays at times, he’s played very well at times for us. He’s got a great shot at it. He’s being treated that way. His history with our plays, with our system, is a positive for him.

Today, Rudolph discussed his mindset during this QB competition.

Mason Rudolph-"“I’m going to go out on the field and let the play do the talking. I’m not trying to convince anybody one way or another. I’m here for a reason. Coaches and teammates believe in me and that’s all I can control.” #Steelers #HereWeGo

It seemed like the ship had sailed on Rudolph ever being the Pittsburgh Steelers’ starting quarterback again. He has had chances in the past when Roethlisberger was unavailable and the results were disappointing.

Last season, he had to fill in for Ben Roethlisberger for 1 week agains the Lions, who were 0-8 heading into the matchup. Rudolph led the Steelers to a tie.

If his past performances as the team’s starting QB are any indication, Steelers fans could be in for a long year if Rudolph wins the starting job.