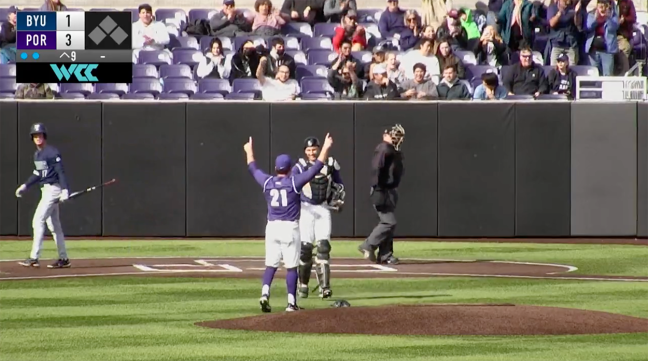 However, when it comes to college baseball, throw out the rankings because any team can win on any given day. That was clear this weekend as Portland hosted BYU for a Thursday, Friday, Saturday series.

After losing the first game 2-6, the home-team Pilots (one of the best mascots in sports) took down the Cougars 11-1 and 3-1 in back-to-back days to win the series. It was an upset series win that will boost the resume of the former while hurting the resume of the latter.

The Portland win was big and the pitcher who closed things out celebrated accordingly. He was downright disrespectful in the best way possible.

In the top of the ninth inning, the Pilots held a 3-1 lead with two outs and no runners on. 5-foot-9 junior Peter Allegro was on the mound to close things out and threw some cheese to get BYU’s last hope swinging.

After getting the strikeout to take the series, Allegro had some pip in his step and had one of the most vicious K-struts of all-time.

In fact, it wasn’t even a K-strut. Portland’s Peter Allegro hit a full-on K-backflip.

Allegro took a few steps off of the mound, dropped his glove and straight-up backflipped all over the Cougars.

DO A FLIP!! Pilots take the rubber match for their first WCC series victory of the year!#WeArePortland | #GoPilots pic.twitter.com/6hK2BOZrrQ

The Pilots are 14-5 on the year and are quietly contending for the WCC title. Gonzaga will likely close things out, but if Portland can somehow pull off a regional birth, Allegro’s backflip will need to come out once again.