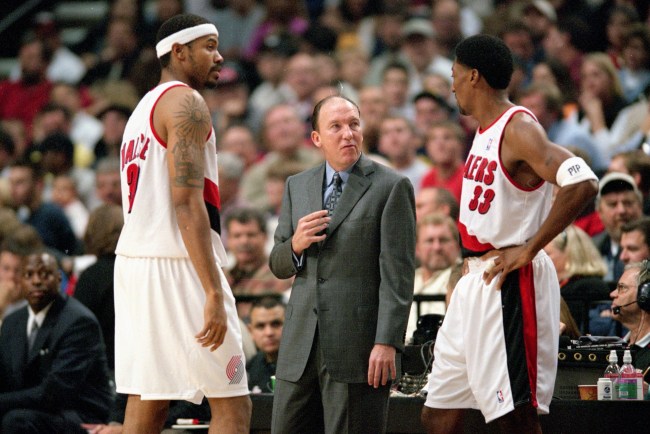 For anyone old enough to remember the Portland Trail Blazers teams from the early-2000s, you probably recall the nickname that many hoops fans referred to them as, the “Jail Blazers,” which stuck because of the influx of wild stories and arrests that some of the players on the team experienced. And, in a new book entitled Jail Blazers: How the Portland Trail Blazers Became the Bad Boys of Basketball, author Kerry Eggers details some of the escapades of the team, which included talking to a former flight attendant named Stephanie Smith-Leckness.

According to SI.com, Smith-Leckness served as a flight attendant for the team on Paul Allen’s private plane for nine years, traveling to every road game with the team. As you might imagine, given the fact the team had a reputation for being bad boys, Smith-Leckness has plenty of memories from her time with the team, and they all sound as degenerate ever.

While Stephanie Smith-Leckness said that her job was fun and rewarding, she did say it brought challenges, even being quoted as saying she “was kind of like the mother hen” to the players, who were, mostly, “a bunch of really young, way-too-rich kids.” And, apparently, some of the players ignored rules like kids would, with Smith-Leckness even saying several players kept weed on the plane.

“I smelled it a few times. I went to who I thought put it there and told him, ‘I’ll pull it out the next time and show it to customs.’ Never had that happen again.”

Of course, some pot on the plane wasn’t the craziest thing that the flight attendant saw.

For years, there have been legendary stories about NBA players going to strip clubs or womanizing, and Stephanie Smith-Leckness talked a little bit about some of the things she saw while on the road.

“I’d ask them, ‘Why do you go out until 4 in the morning and know you have to be shootaround at 10?’ Once in New York, several of them had been at some famous strip club the night before the game. They all got back to the hotel at 6 or 7 (a.m.). Then they lost to the Knicks that night.”

“We’re checking into the Houston Galleria hotel at about 3 one morning, and I see a bunch of women in the lobby. I said to someone, ‘I don’t think there would be a wedding at this time of night.’ Scottie told me, ‘They’re hoochie mamas. They’re here for us.’ And I said, ‘But I don’t understand. If you’re going to do that, why are you married?’ I just couldn’t understand that aspect.”

Although the Portland Trail Blazers teams of the early-2000s had a bad reputation around the league or from fans, Smith-Leckness was quick to say that they weren’t really bad guys, and that “they were good to me and the other girls. They weren’t disrespectful to us. But what they were doing off the court was not going to make them winners on the court.”

The entire piece from SI.com includes excerpts and other stories from Eggers’ book, Jail Blazers: How the Portland Trail Blazers Became the Bad Boys of Basketball, so you might want to check out the rest of the stories over on their website.