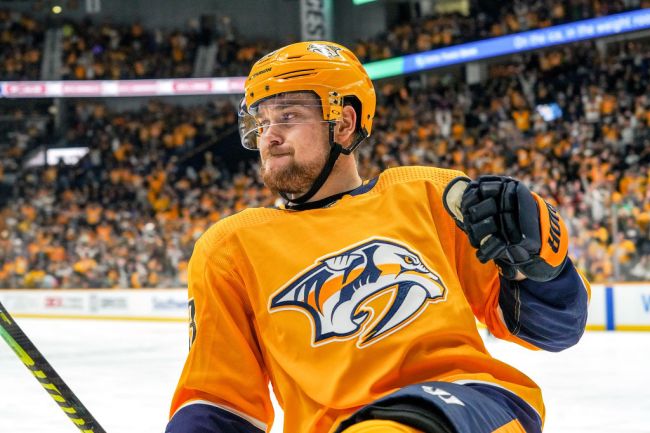 The Nashville Predators made a somewhat surprising move on Thursday trading Viktor Arvidsson to the Los Angeles Kings in exchange for a 2021 second-round pick and a 2022 third-round pick. It’s not just Preds fans that are surprised and upset about the move, some of Nashville’s players seem to be mad about the trade as well.

Ryan Johansen followed that up by posting a photo to Instagram in reaction to the Arvidsson trade saying that this was “an awful day.”

Arvidsson, Johansen, and Forsberg spent plenty of minutes on the same line together in Nashville, fans even nicknamed their line the ‘JOFA line,’ which had been a huge piece to the franchise’s successes over the last handful of years.

The 28-year-old, undersized forward was a fan-favorite in Nashville with his non-stop motor and keen ability to be at the right place at the right time on the ice.

The Predators weren’t going to keep this core together forever, however, this is a team that needed a shakeup as Nashville hasn’t made it out of the first round of the playoffs since the 2017-18 campaign.

Nashville was also able to get a somewhat solid return on Arvidsson, who is a very injury-prone player. Arvidsson carried a $4.25 million cap hit over the next three seasons, so moving him frees up a fair bit of cash for Nashville. Plus, this makes the upcoming expansion draft a bit easier to maneuver for the Preds’ front office.

Arvidsson is coming off of a 10 goal, 15 assist season in which he played in 50 regular-season games with the Predators.