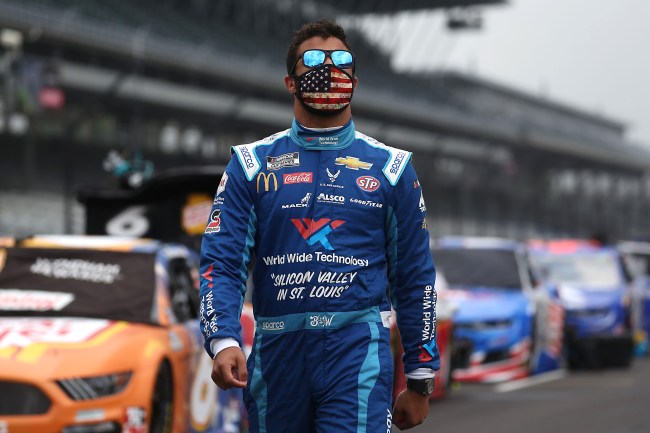 President Donald Trump started off the week by attacking NASCAR driver Bubba Wallace, accusing Wallace of a “hoax” after a suspected noose was found hanging in his garage at Alabama’s Talladega Superspeedway a couple of weeks ago. The President also criticized NASCAR for banning the Confederate flag in his Tweet early Monday morning.

Has @BubbaWallace apologized to all of those great NASCAR drivers & officials who came to his aid, stood by his side, & were willing to sacrifice everything for him, only to find out that the whole thing was just another HOAX? That & Flag decision has caused lowest ratings EVER!

On June 21st, NASCAR officials found the noose and informed Wallace of its existence about a week after it banned the racist Confederate flag from events. The FBI would later determine that the noose was a garage pull and not a “hate crime” but Wallace was adamant that he had never seen a garage pull tied like that.

"I've been racing all of my life, we've raced out of hundreds of garages that never had garage pulls like that. … It's a straight up noose."

Mr. President, your premise is false.

1) It wasn't a "hoax." Everyone involved truly believed it was threat directed at Wallace. And Wallace didn't report it; he was informed about it.

2) There hasn't been any noticeable impact on the ratings, which are not the lowest ever.

Press Secretary Kayleigh McEnany was asked about the President’s criticism of Wallace on Fox News Monday morning and she says Trump was making is a broader point that this rush to judgment on the facts, before the facts, is unacceptable.”

Fox News grilled Press Secretary Kayleigh McEnany about the president attacking Bubba Wallace. She claims "what the president is making is a broader point that this rush to judgment on the facts, before the facts, is unacceptable." pic.twitter.com/ELdBcKnxtX

a broader point that this rush to judgment on the facts before the facts are out is not acceptable. And we saw it with the Covington kids and we saw with Jussie Smollett and now we saw it in this case,”