Pro Bowl WR Courtland Sutton On Drew Lock’s Swag, His Refusal To Root For The Chiefs In The Super Bowl, And How His Work With Adidas Is Helping Save The Environment 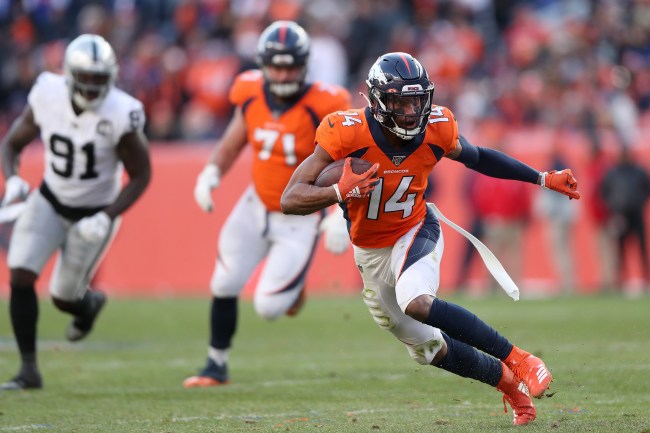 Broncos wide receiver Courtland Sutton’s star is rising in the NFL. This past season Sutton racked up 1,112 receiving yards and six touchdowns in his second NFL season, has become the Broncos’ top offensive target and participated in his first Pro Bowl last week.

We were able to catch up with Sutton at Adidas’ Studio, an event organized by the sneaker giant that highlighted the need to end the use of plastic waster during Super Bowl week in Miami, and talked to him about Drew Lock, the Broncos future, his thoughts on the Super Bowl and his partnership with Adidas that includes.

How was your experience at the Pro Bowl?

“It was a cool experience, the whole thing from the moment of being there to practices to the interaction in the hotel. Being able to go to Universal and Disney for the first time, the whole week was a cool thing to be a part of”

How do you got winning the Super Bowl this weekend?

. @Broncos WR Courtland Sutton wont be rooting for the @Chiefs to win the Super Bowl “Even if they’re 10 point favorites I can’t cheer for them” @SuttonCourtland @adidasFballUS pic.twitter.com/ggLvVVtEom

What are your expectations for the Broncos next season?

Can you tell us a little about playing with Drew Lock?

adidas has teamed up with Parley to create a limited-edition collection featuring football cleats, running footwear, and training apparel made with ocean plastic, what is it like partnering with those two companies?

“One of the big parts of me making my decision to come to Adidas, beyond the cleats and beyond just the shoes was to be a part of what they’re doing in trying to save the oceans and the environment any way we possibly can so for them to come up with a whole lineup, clothes, cleats, shoes that’s made from recycled materials from the ocean, that’s dope”

Sutton was in attendance when Adidas and Parley donated a sustainable football field made with approximately 1.8 million recycled bottles of recycled plastic waste, intercepted from remote islands, beaches, coastal communities and shorelines to Miami Edison high school as they in their commitment to end plastic waste.

Building for a better tomorrow. 🏗

Approximately 1.8 million plastic bottles were repurposed and used to build this new home for @miamiedisonsr. pic.twitter.com/r3kNGk4Mqj

To be on the field you can tell that’s going to mean a lot to that community for years to come and it’s crazy to see how they did it so quick, how they were able to transition this open space to a working an open operating field that we’ll be able to use for years to come.