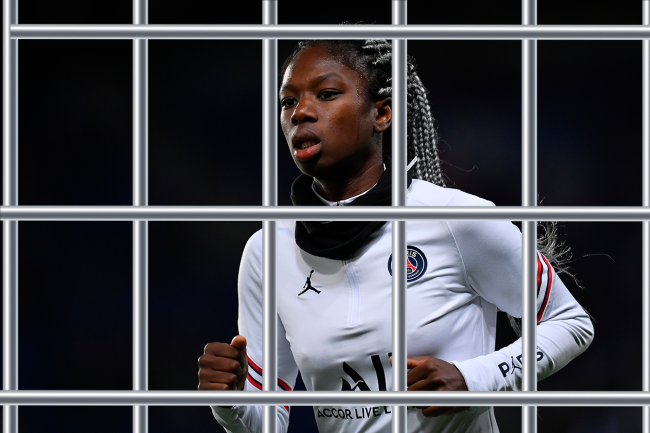 Paris Saint-Germain Féminine midfielder Aminata Diallo has been arrested for the wildest alleged attempt to sabotage a fellow athlete since Tonya Harding. Per the club, the arrest is in connection with an alleged, deliberate attack on a teammate over playing time.

The alleged story is insane.

Per the reports, 31-year-old Hamraoui was in Diallo’s car with two other teammates after leaving a club dinner in Paris. When the car pulled in front of Hamraoui’s home, two men wearing ski masks dragged her from the car.

Armed with iron bars, the two assailants began to punch, kick and hit Hamraoui on her legs. he assault was targeted only at Hamraoui and the other players reportedly remained in the car.

After two minutes of strikes to Hamraoui’s lower body, the men ran off. She was taken to the hospital after the attack and required stitches for her leg and hand injuries.

Although the injuries did not threaten her career, Hamraoui was unable to make her 100th appearance for PSG against Real Madrid in the Champions League on Tuesday. She will likely miss more time as she recovers.

Meanwhile, this is where things get extremely suspicious.

Diallo made the start in Hamraoui’s place on Tuesday. The two PSG teammates are both defensive midfielders and are in direct competition for the same spot in the lineup on both the club level and for the France national side.

Thus, the assumptive conclusion and reason for Diallo’s arrest, is the belief that she organized the attack to earn more minutes on the pitch. Or, at the very least, she wanted an opportunity to show why she deserves more playing time. Crazy.

PSG responded to the incident:

“Paris Saint-Germain acknowledges that Aminata Diallo was remanded in police custody this morning by the Versailles SRPJ as part of the proceedings initiated following an assault last Thursday evening against the club’s players.

“Paris Saint-Germain condemns in the strongest possible terms the violence committed. Since the evening of Thursday, Nov. 4, the club has taken all the necessary measures to guarantee the health, well-being and safety of its players.

“PSG is working closely with the Versailles SRPJ to shed light on the facts. The club is paying close attention to the progress of the proceedings and will study what action to take.”