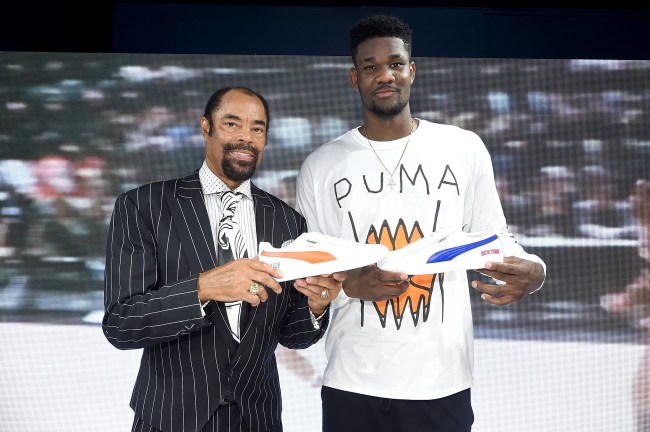 Yesterday, it was announced by Complex that rapper Jay-Z who’s currently on tour with his wife would be joining Puma as the President of Puma Basketball. That news was quickly debunked by ESPN‘s Darren Rovell who said the contract Jay-Z signed was actually to become a Creative Director.

Regardless of Jay-Z’s title within the company, this is the fastest possible way to take a fringe brand like Puma Basketball and IMMEDIATELY become relevant. Thus far, it has worked. Shortly after news broke that Jay-Z was signing with the company it was revealed that projected #1 overall NBA Draft pick Deandre Ayton had signed multi-year, multi-million dollar contract with Puma. Fellow top NBA draft pick Marvin Bagley III who’s expected to go 2nd in the NBA draft also signed a multi-year multi-million dollar contract with Puma.

Deandre Ayton, the projected No. 1 pick of the 2018 NBA Draft, will be the highest paid player annually by a shoe brand in this draft class after signing a multi-year deal with Puma, a source told The Athletic. ESPN first reported the multi-year deal between Ayton and Puma.

.@MB3FIVE on what basketball and sneaker culture legacy he wants to create by signing to Puma:https://t.co/M9cNwM66R5 pic.twitter.com/VbjH4HUqQQ

“I don’t want to be under nobody else.” –@DeandreAyton when asked why it was significant to get in on the ground level with Puma.https://t.co/M9cNwM66R5 pic.twitter.com/jshflGvLcK

So, now we know why Deandre Ayton and Marvin Bagley III were so keen to sign with Puma. It’s no coincidence that these two overlapping news stories broke on the same day. Here’s how the Jay-Z news broke:

Puma just announced Jay-Z will be the President of Puma Basketball, assisting with brand direction and identifying athletes to sign.

Well, that’s one way to skyrocket to relevance. https://t.co/NivCgdnEXn

UPDATE: Jay Z has not signed up for the role of president of Puma Basketball. The contract he signed was for creative director.

Deandre Ayton and Marvin Bagley III are the first major basketball players to sign with Puma Basketball since 1998. This is clearly a HUUUUUUGE loss for Nike who appears to have tried to woo Bagley and his father over the years:

Nike gave Marvin Bagley’s dad his own team on the summer circuit for years. Even gave them a berth in the Peach Jam despite the fact they were 0-16 or something like that. And now Bagley (and Ayton, who bounced around the shoe circuits) have signed with Puma.

The explosive wing measured a 41.5” vertical at the Combine, and ESPN’s @DraftExpress says Smith “could be the best athlete in the draft.” pic.twitter.com/gq5PP7o3J1

Imagine if Puma Hoops grabs another player in this NBA Draft. They suddenly go from not being in the game at all to skyrocketing back into relevance in one fell swoop. It’s amazing.