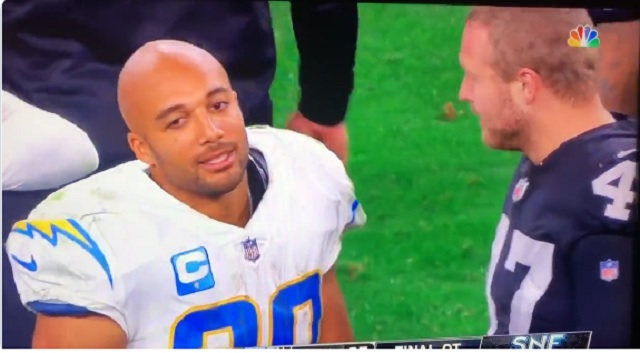 It appears that Chargers HC Brandon Staley did indeed cost his team a spot in the playoffs by calling a timeout in overtime on Sunday night.

On 3rd-and-4 with 38 seconds left to go in the game, the Raiders appeared content to run out the clock to end the game in a tie that would have sent both the Chargers and Raiders into the playoffs. The Chargers would eventually call a timeout for whatever reason, and the Raiders responded by running the ball for a first down which led to them kicking a game-winning field goal moments later.

For inexplicable reasons, as the Raiders appeared willing to run out the clock and play for a tie — getting both teams in the playoffs — Brandon Staley called timeout with 5 seconds on the play clock and 38 seconds remaining in overtime. It cost the Chargers their season.

After the game, Chargers’ Austin Ekeler could be seen asking a Raiders’ Trent Sieg if the Raiders were going to kneel the ball on the third down play, and Sieg appeared to say, “yeah.”