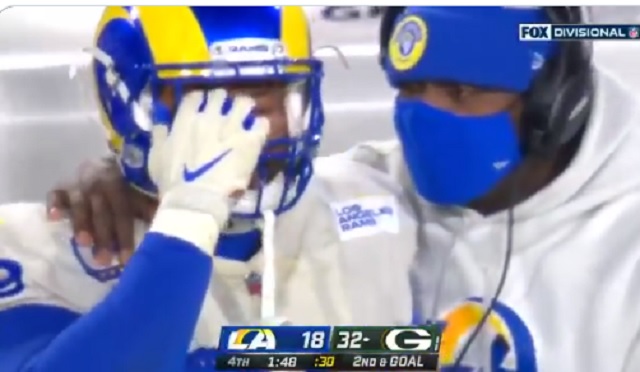 Aaron Donald hurt his ribs during the Rams’wildcard playoff game last week against the Seattle Seahawks and it doesn’t seem like he was able to recover from his injury in time for his team’s big game this weekend.

Ahead of the Rams-Packers playoff matchup, Donald tried to downplay the severity of his injury.

“Man, my damn side is just sore, I’m good though,” “I ain’t gonna sit here and talk about my damn side the whole time. I’m good. I just had a whole workout, feel strong, feel healthy, so I’m good.”

On Saturday night, a frustrated Donald struggled the entire game and looked like a shell of his normal self.

Aaron Donald was on the field for every play of that Packers' touchdown drive, but other than giving the Packers 15 free yards with an unnecessary roughness penalty, he didn't make much impact. Packers still doubling him, but he doesn't look like himself.

After the Rams lost the game and emotional Donald was seen with tears in his eyes on the sideline.

Aaron Donald is emotional on the sidelines. pic.twitter.com/lgrMRLtQZ9