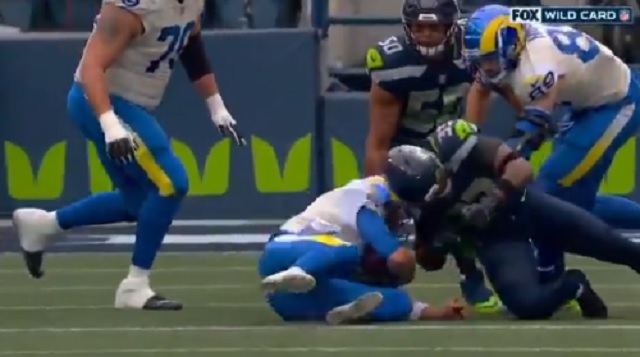 Seahawks safety Jamal Adams was involved in a controversial hit on Rams QB John Wolford and fans are calling him out on it.

During Saturday afternoon’s Seahawks-Rams wildcard playoff game, Adams hit Wolford in the head with his shoulder as Wolford dove forward.

Jamal Adams pops John Wolford as he was going down #LARvsSEA pic.twitter.com/oKxA8lkJ0v

While there wasn’t a penalty called on the play because Wolford was onsidered a runner by the refs on the field, Fox Sports rules expert Mike Periera believed that Adams should have been flagged for a hit on a defensive player.

This is a foul. He’s defenseless at that point… It’s a hit on a defenseless player, shoulder to the head or neck area…”

Wolford was forced to leave the game and was transported to the hospital in an ambulance.

After the hit, Rams fans called on the NFL to suspend Adams.

@NFL suspend Jamal Adams for 4 games at minimum next season for that dirty ass hit he put on Wolford. It was a clear target and everyone knows it, Wolford is now going to the hospital Your refs should be ashamed for not ejecting him nor even giving the Seahawks a penalty for that

You gotta suspend Jamal Adams for this hit… https://t.co/XDXsWxwpJS

I hope this isn't as bad it sounds. Suspend Jamal Adams. https://t.co/GO30F7ZBw4

John Wolford is now on his way to the hospital because of a dirty hit made by Jamal Adams.

He did the same thing to Carson Wentz last year , and Wentz had to leave the game because of a concussion.

In both times, he received no punishment.

Jamal Adams’ best play all year was a dirty hit on a backup QB… pic.twitter.com/xEJT8nsrpO