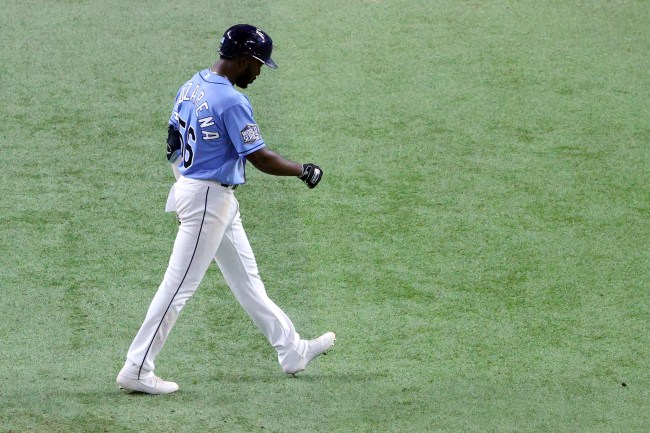 Randy Arozarena has been detained in Mexico’s Yucatan state for allegations of domestic violence. The prosecutors office state that the Tampa Bay outfielder was detained for “problems relating to his ex-partner.”

Reports out of Mexico are saying that Arozarena showed up to the home of his daughter with gifts. Things then took a turn when he allegedly tried to take the child from the house without permission. Violence ensued between him and the daughter’s mother’s father.

ESPN’s Jeff Passan reports that he “assaulted the woman’s father.”

A video has surfaced that appears to show a standoff amongst Arozarena and neighbors, while he holds the child in question.

At this point, he has not been formally charged. Mexican law allows a two-day period for prosecutors to choose whether to press charges and suspects are typically held in jail while that decision is made. Authorities have said they will release more information about the case in the coming days.

The MLB has launched an official investigation into the incident and will continue to look at the matter while more details surface. As for Arozarena, he has not made a public comment and it is not clear as to whether he has a lawyer at this point.

Arozarena was named MVP of the AL Championship Series after Tampa Bay beat Houston in seven games. He hit .377 with 10 home runs and 14 RBIS in 20 postseason games. The Rays lost the World Series to the Los Angeles Dodgers in six games last month and will monitor the league’s investigation.