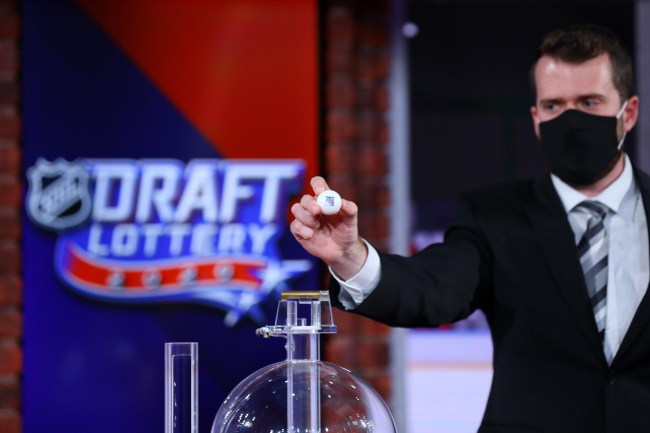 The race to sign Alexis Lafreniere is over after the New York Rangers were awarded the #1 overall pick in the 2020 NHL Draft under the most unusual circumstances in recent memory. Lafreniere led scoring in the Quebec Major Junior Hockey League with 112 points (77A, 35G) and won the QMJHL MVP along with plenty of other awards. He’s a generational talent and player the New York Rangers will seek to rebuild a Stanley Cup caliber team around.

The Rangers were awarded the #1 overall pick on Monday night under the strangest of circumstances. The order of this year’s lottery was split between a ‘First Phase’ which included seven teams that were not a part of the NHL’s 24-team Stanley Cup Playoffs restart bubble. Then there were 8 placeholder teams. And a separate draw was weld for the top three overall picks.

On Monday night, NHL Commissioner Gary Bettman wore a mask and watched as an Ernst & Young employee removed lottery balls from a briefcase, showed each ball to the Commissioner so he could inspect the team’s logo, and placed them into a lottery machine. But this E&Y employee buttfumbled it and dropped the New York Rangers ball in first, the same Rangers who would win the #1 overall pick.

The ball was weighted for the rangers. He da dropped it.

Anyone else notice the Rangers ball get dropped in, then get taken out and places back in? Was it a weighted ball perhaps?

The NY Rangers ball was removed but this didn’t stop a flurry of conspiracy theories from popping up immediately about how the Rangers’ ball might’ve weighed more than the others. And then there’s the moment the Rangers’ ball actually went through the shoot for the #1 overall pick. The Toronto Maple Leafs were literally a fraction of an inch away from the top pick.

So the NY Rangers win the NHL Draft Lottery? The NHL keeps coming out of this looking good. Can you imagine the outrage if Pittsburgh, Edmonton or Toronto had won?

The Rangers have unlimited resources and have won the Stanley Cup once in the past 80 years. I feel like this is often overlooked because the Maple Leafs are in a similar spot.

A lot of fans were not convinced this was legit.

@NHL If your going to cheat don’t be obvious! The New York Rangers ball was rigged! It’s funny how it fell out of the ball handler hand right into the where the balls were being held! Soon as that happens, I said The Rangers will win the lottery! Guess who won! The Rangers! Right

That has to be a bonafide ‘Ray Finkle’ moment for some Leafs fans. Knowing they were a fraction of an inch away from being able to sign Alexis Lafreniere. Instead, the Leafs just got bounced from the Playoffs and the Leafs surrender their #13 pick to Carolina. That’s a major “OOOOFF” right there.

Meanwhile, the Detroit Red Wings were mathematically eliminated from the NHL Playoffs before the season was even shut down back in March and they’ll be drafting with the #4 overall pick and the New York Rangers were taking part in the Playoffs restart just mere days ago.

The silver lining here is the Rangers consistently and inexplicably dump their top talent to my Tampa Bay Lightning every couple of years so by my calculations, Alexis Lafreniere should be with the Bolts at some point in the next few seasons.

This is perfect. Can’t wait for the Rangers to dump their top talent to Tampa for pennies in 2-4 years. ⚡️⚡️⚡️ https://t.co/Tnm8g0SBku

Can’t wait to see him in Tampa.