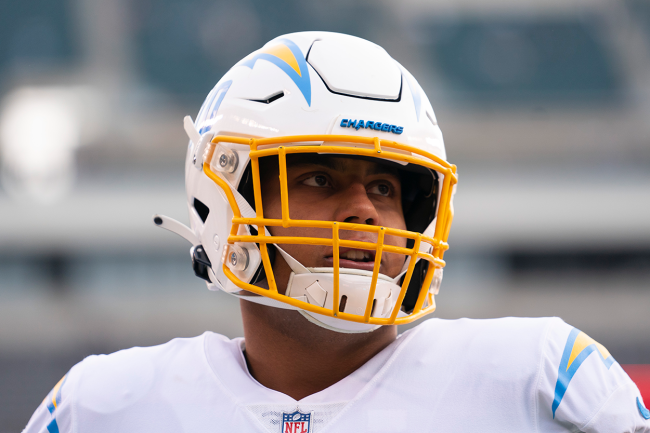 Rashawn Slater’s first year in the NFL couldn’t have gone any better. At least, on an individual level.

After being drafted with the No. 13 overall pick in the 2021 NFL Draft, Slater became the starting left tackle for the Chargers in Week 1. By the end of the year, he was a Pro Bowler.

Throughout the season, the 6-foot-4, 315-pounder allowed only four sacks and six quarterback hits in 752 pass-blocking snaps. Slater was also a dominant run blocker and helped clear the path for Austin Ekeler, who fell just short of 1,000 yards while dealing with injuries throughout the year.

Now, as the Northwestern alumnus looks ahead to year two, there are no days off. Not even on vacation.

Earlier this year, Los Angeles traded for linebacker Khalil Mack, one of the most dominant edge rushers in the NFL. As a result, Slater has his work cut out for him in practice.

When the deal got done back in March, Slater was on his honeymoon in Bora Bora with his wife Stassney. While on vacation, head coach Brandon Staley texted him “get your mind right.”

Slater immediately got to thinking about the challenge ahead of him and decided to put down the drink and get to work. A recent video posted by Stassney shows her husband’s response to the news.

He walked out into the water and started going through his pass sets. No days off!

The Chargers have high aspirations to contend for a Super Bowl in 2022. Slater’s dominance will have to continue for that to happen and it doesn’t look like he plans on slowing down.