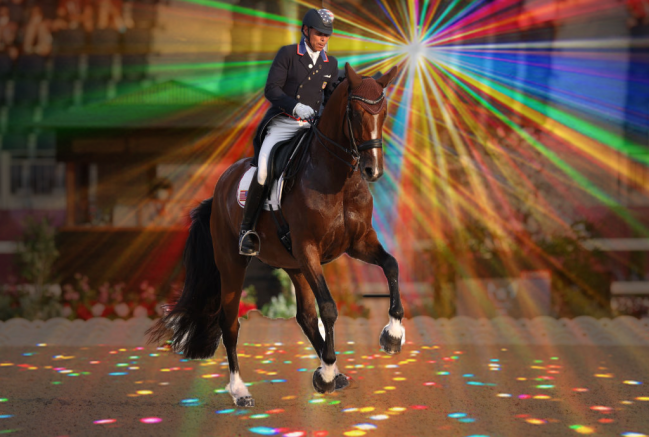 Steffen Peters became the oldest American to win an Olympic medal since 1952 at the age of 56, but it is his horse that stole the show. Suppenkasper, better known as ‘Mopsie,’ is a 13-year-old gelding that loves to dance.

The high-stepping stallion was a part of a team silver medal for Team USA Equestrian’s dressage team on Friday. He and Peters competed in the individual dressage event on Saturday.

In dressage, a horse and its rider complete a series of moves that are technical and rhythmic. Communication between the horse and rider must be flawless.

In the individual competition, known as grand prix freestyle, riders are able to create their own routines. With such, they can also choose their own music.

Despite the rather graceful and elegant nature of dressage, Peters decided to mix it up. He and Mopsie rode to a mix that combined “Calabria” and “What Is Love,” among other club hits.

It was a total rave and Mopsie was jamming out, waltzing in perfect time to the mix and to a top-10 finish.

"OMG THEY'RE PLAYING MY SONG." – the horse at the club pic.twitter.com/xRNJ5N6acE

In a TikTok video, the mix’s creator Taylor Kade explained how the whole thing came about. He had someone contact him a few years ago to make a few dressage-compatible mixes, and as it would turn out, two of the three made the Olympics.

Peters and Mopsie may not have reached the podium with their solo routine, but it was the significant fan favorite and took the world by storm.