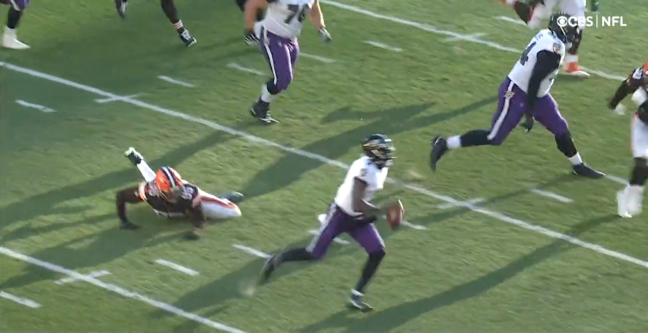 When the Baltimore Ravens flew into Cleveland for Sunday’s game against the Browns, they probably had a much better result in mind. Not only did they fall behind 24-6 at halftime, but Lamar Jackson suffered an injury that kept him out of the game.

In his place, Tyler Huntley took over behind center and did everything he could to keep his team in the game. Huntley, who is in his second year out of Utah, is a tremendous athlete. He may not be starting quarterback caliber, but he is a more than serviceable in the second-string role.

However, he was thrown directly into the fire against Myles Garrett, Jadeveon Clowney, Malik McDowell and a dominant defensive front. It was not exactly a warm welcome.

Late in the third quarter, Huntley was forced to run for his life.

In an incredibly impressive showing of athleticism, Huntley dropped back to pass on 2nd-and-20. He was flushed from the pocket by Malik Jackson on his left and cut back to the right.

Huntley narrowly escaped the outstretched arms of Garrett but came face-to-face with No. 90. Instead of trying to lay a shoulder against the 6-foot-5, 267-pounder, he made a nasty cutback to shake Clowney and ran past Jordan Elliott.

The chaos was not done there. Huntley ran back across the field, caught a block from one of his lineman and shook cornerback Troy Hill out of his shoes before eventually going down. It was one of the best 14-yard gains that you will ever see.

Unfortunately, Baltimore only got three points from the drive.