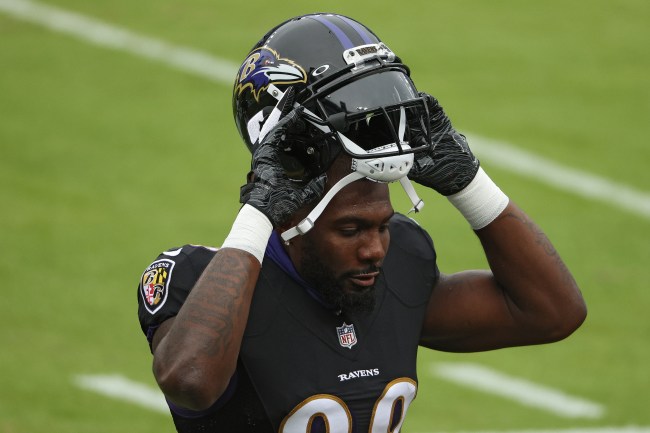 Dez Bryant was supposed to play in Tuesday night’s Ravens-Cowboys game but he apparently tested positive for COVID-19 before kickoff.

According to Bryant he was pulled during warmups due to his positive test.

NFL.com’s Tom Pelissero went on to report that Bryant had tested inconclusive two times on Tuesday before eventually testing positive for Covid-19 after getting a third time.

Dez Bryant’s daily PCR test taken this morning came back tonight and was inconclusive, per source. The test was rerun and that also was inconclusive. He was pulled off the field for a POC test, which was positive for COVID-19. That’s why he’s out against the #Cowboys.

All other #Ravens players tested negative for COVID-19 and no high-risk close contacts were identified, source said. So, no Dez Bryant, but game on as scheduled and no other players impacted.

Before the game, Bryant was apparently seen hugging mutliple Cowboys players according to this deleted tweet from Ryan Mink of the Ravens.

Fans questioned why the NFL would allow the game to go on if Bryant was exposing other players before the game.

Not sure why this tweet was deleted but here’s Dez Bryant – with Covid – hugging Dallas players pre-game. Yet the NFL said there were no contact tracing issues. Straws and camel’s backs come to mind. pic.twitter.com/JDs6AVEgAy

Then he was pulled from the game due to a positive COVID-19 test 😳 pic.twitter.com/S32I29mL2M

This game feels so gross. Like, you know Dez was hugging people. We saw pictures of it. The league pulls him but won't acknowledge anything else cause the revenue. . .

But there’s literally photos of dez hugging and shaking hands of Cowboys….what are you doing @NFL https://t.co/sc5gUl2AFz pic.twitter.com/quh7Vk74Ql

I’m *legally* not allowed to walk outside my home in CA, but Dez Bryant tested positive and was hugging people on National TV and the game goes on.

Update: The NFL released a statement on the Dez Bryant situation.

NFL on Bryant hugging Cowboys personnel: "Standard protocol is to examine the device of the infected person for duration of time and proximity. Other factors include whether the interaction was indoors or outdoors. It was determined that there were no high-risk close contacts."