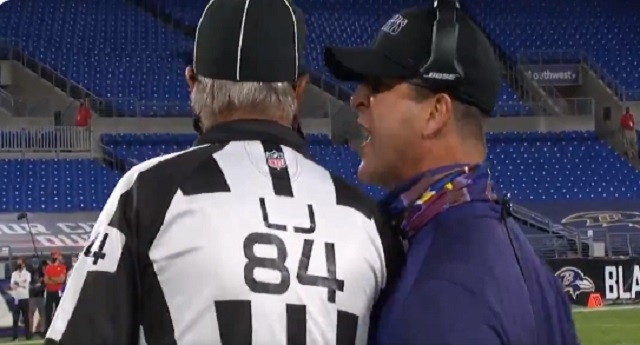 During the Ravens’ Monday Night Football game an irate Harbaugh took off his mask to get in the ref’s face and yell at him after the team was called for a tripping penalty.

John Harbaugh about to fistfight this ref has been my mood all 2020 pic.twitter.com/ENRaKPkc8a

Considering the NFL has been handing $100k fines to coaches every week, there’s a good chance Harbaugh is going to get with one too.

John Harbaugh was yelling at an official with his mask off and his face inches from the official's face. That may cost him $100,000.

Here's what he said before the game: pic.twitter.com/MYiYSj9elH

Harbaugh being willing to spend $100K to argue a call is a flex.