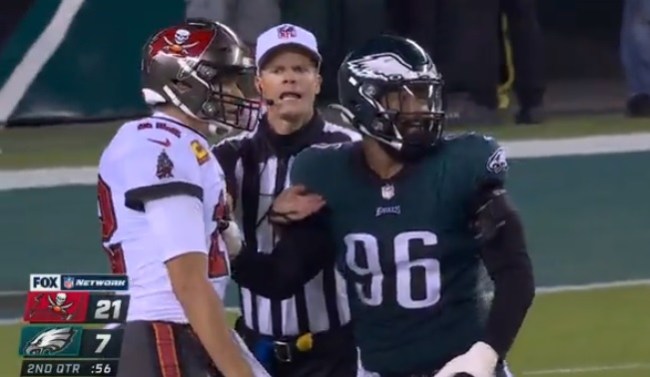 Apparently, it’s against the rules to block Tom Brady from making tackles after interceptions.

During Thursday night’s Bucs-Eagles game, a referee would not allow Brady from getting blocked by an Eagles player after an interception.

Ref tells him to stop blocking Tom Brady IN THE MIDDLE OF THE DAMN PLAY pic.twitter.com/YInNh6xDfU

Totally legal block off an interception and the referee was like nah don’t touch Brady. Ridiculous pic.twitter.com/BjRqSJmvfs

Fans were annoyed at the ref for breaking up the play.

The fact that the ref ain’t let our guy block Brady after he threw a pick 🤔 https://t.co/e7Fmb9SNjB

Defensive lineman are taught to block the QB on an interception. But when it’s Tom Brady it’s called rough play and dirty as he is protected by the refs.