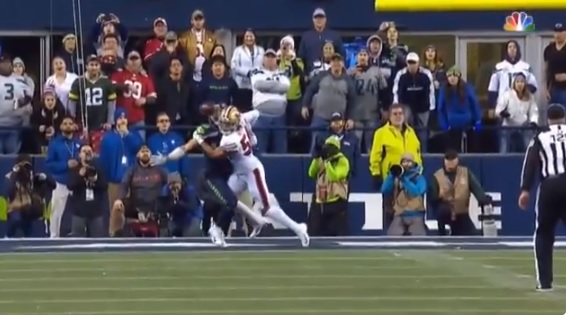 The final game of the season between the Seahawks and the Niners had major playoff implications and of course it was marred by another referee controversy.

At the end of the game with the Seahwawks down five points and less than fifteen seconds to go, Niners linebacker Fred Warner appeared to hold Seahawks tight end Jacob Hollister near the goal line. The refs missed the call and then refused to use the new pass interference replay review system that was implemented at the beginning of the season to avoid missing calls like these.

How do you not review this??? ⁦@NFLOfficiating⁩ come on pic.twitter.com/PVycEkMUVs

Update: NFL senior vice president of officiating Al Riveron explained that the NFL did review the play and determined it was not pass interference

“Well, we actually looked at it here in New York,”. “We had a great look. NBC gives us a great look of the entire route. So, we actually did perform a review, but based on what we saw, we didn’t see enough to stop the game. But we did review it.

Fans went on to bash the NFL for implementing a new pass interference replay review system and not using it when it matters.

The 49ers committed obvious, blatant pass interference that the officials missed — exactly the kind of missed call that instant replay review of pass interference was supposed to prevent — and the booth never signaled for it to be reviewed.

That play, in that spot, is exactly why the NFL changed the rule. And they didn’t even look at it.

HOW COULD THE OBVIOUS PASS INTERFERENCE ON HOLLISTER NOT HAVE BEEN A BOOTH REVIEW???

If the booth isn’t going to review that PI why even have the rule? It was my understanding that it was for moments like that.

What is the point of having booth reviews for PI if that wasn’t reviewed?

There’s just no excuse for not triggering a booth review on that DPI.

That league has more money and technology than God and can’t see something so obvious.