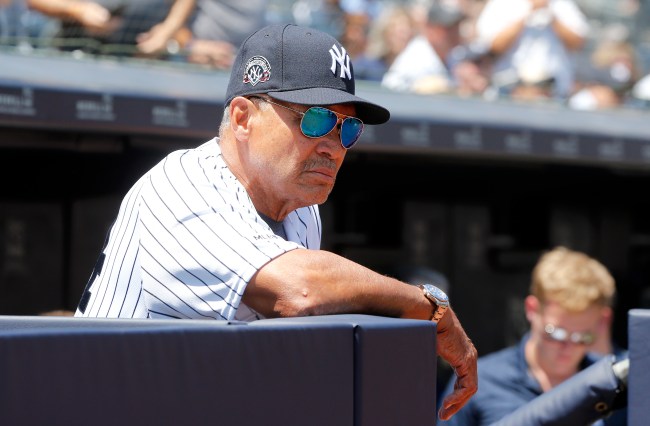 The Yankees-Astros series is tied right now at 1-1 but with Gerrit Cole pitching for the Houston Astros this afternoon (4:08 first pitch) at Yankee Stadium it’s all but certain that the ‘Stros are about to take a 2-1 lead in the series. Cole has been throwing absolutely lights out this season and he hasn’t lost a game since May 22nd, or 147 days ago.

New York Yankees slugger Giancarlo Stanton has struggled this season due to injuries. He appeared in less than 20 games in the 2019 season and only dinged 3 home runs along the way. He did show up in Game 1 of the ALCS against Houston and appeared to prived the spark the Yankees needed to beat Greinke and the Astros.

Giancarlo Stanton was listed as injured for Game 2 of the ALCS and Reggie Jackson, aka ‘Mr. October’, didn’t realize his microphone was on when dropping a handful of F-bombs discussing it.

Reggie was speaking with Jim Bowden on the MLB Network Radio’s ALCS Pregame show along with Ryan Spilborghs and Mike Stanton. There’s no way in hell he knew his microphone was on or he wouldn’t have been talking about suicide + dropping f-bombs.

Here’s the audio clip (via Twitter) and a transcript (via Awful Announcing) of what Reggie said below:

“BOWDEN: Reggie, you share your birthday with me, May 18th. That’s pretty cool, right?”

“JACKSON: I have the same birthday as you?”

“SPILBORGHS: Can that be changed?”

“JACKSON: I’ve been thinking about suicide ever since I heard that.”

“BOWDEN: Giancarlo Stanton’s quad is hurting him, he’s not in the lineup. Your thoughts?”

“JACKSON: Fuck, he’s been out all fucking year! How the fuck could he be hurt? (laughs) This isn’t on-air, is it? Honest to god?”

Game 3 of the ALCS is today, first pitch at Yankee Stadium is 4:08 with the indomitable Gerrit Cole who is issuing less than 1 walk per 9 innings pitched will face Severino, an amazing pitcher but a bit of a wild card choice for the Yankees as he’s only appeared in 3 games this season.

Severino was sidelined until laaaaaate in the season due to a shoulder injury but he’s looked incredibly sharp in his few short outings so far. So maybe this WILD CARD is exactly what the Yankees need to neutralize Gerrit Cole.

Vegas has the Yankees listed as the underdog at home (+140) with the Astros expected to win (-160). The over/under for the game is set at 7.5 runs scored which seems HIGH for a game with Gerrit Cole on the mound but maybe that’s accounting for right field in Yankee Stadium being as short as a Little League park and the Houston Astros possibly touching up Severino for a handful of runs.