Report: Kyrie Irving Wanted Out Of Cleveland Because He Believed LeBron James’ Camp Tried To Trade Him 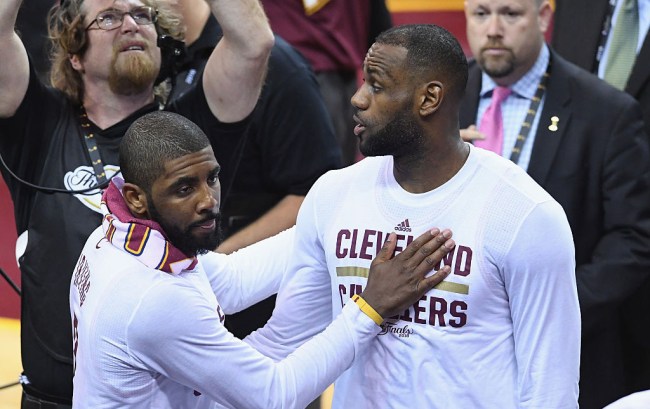 The drama between Kyrie Irving and LeBron James continues to unfold months after this offseason’s blockbuster trade between the Cavs and the Celtics.

Today, ESPN’s Jackie Macmullen revealed that Kyrie Irving wanted out of Cleveland because he felt that LeBron James’ camp had orchestrated a trade for Paul George and Eric Bledsoe that would have sent him to Phoenix.

In mid-June, shortly before Griffin left, team and league sources confirm, the Cavs explored a three-way deal with Phoenix and Indiana that would have shipped Irving and Frye to the Suns and brought Eric Bledsoe and Paul George to Cleveland. The Suns resisted, unwilling to part with their No. 4 pick, which they planned to use to draft Josh Jackson.

No formal offer was made by any of the teams, but news of this potential transaction stung Irving, who, sources close to him say, became convinced that LeBron’s camp, which also represents Bledsoe, orchestrated the trade talks.

Team and league sources refute that, saying that it was Griffin who initiated the trade talks with Phoenix. Griffin, who is close with Irving, sensed both his unhappiness and his restlessness and was preparing for the possibility that Irving would request a trade. But once Griffin was no longer employed by the team, the conversations stalled. Cleveland then engaged in talks with Indiana and Denver, according to league sources.

Considering LeBron is probably consulted about every move the Cavs he must have been aware that the team was looking to trade Kyrie before things turned soured and didn’t do anything to stop it.