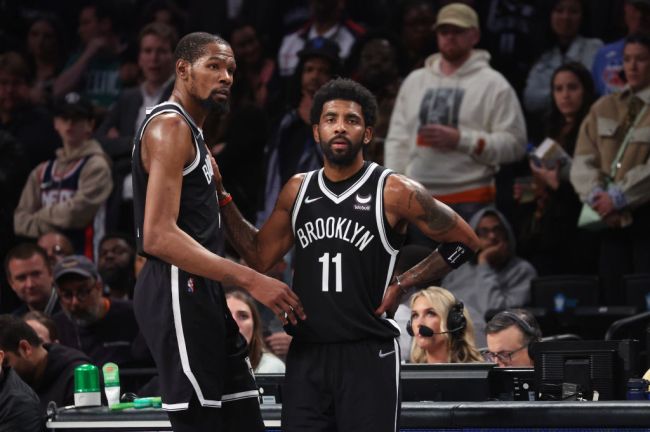 The past couple of seasons have not exactly gone according to plan for the Brooklyn Nets. If Kevin Durant had a slightly smaller foot, they might’ve won an NBA title last season. Instead, they were eliminated in the Eastern Conference Finals.

The Nets followed that up by a year of dysfunction that saw Kyrie Irving become a part-time player, James Harden force a trade to the Philadelphia 76ers just one year after forcing his trade to the Nets, and the team get swept by the Boston Celtics in the first round of the playoffs.

Unfortunately for Nets fans, things could be about to get much worse. According to New York Daily News NBA reporter Kristian Winfield, the Nets aren’t currently willing to give Kyrie Irving a long-term contract extension. The belief is that could lead Kyrie to reject his player option for next season and leave the team, with Kevin Durant soon to follow.

Good morning: The Nets are playing with fire.https://t.co/Ff3rI22GI4

This is why the Nets’ championship hopes hinge on an amicable solution with Irving, whose personal decision not to get vaccinated and unpredictable injury history have left the Nets hesitant, and now, according to a source familiar with the Nets’ thought process, outright unwilling to give him a long-term extension.

It’s hard to blame the Nets for not wanting to commit to a player who has only played 103 games in the 3 seasons since he joined the team. However, it might be a move they have to make if they want to remain in contention.

With how far over the cap the Nets currently are, they wouldn’t actually be able to replace Kyrie if he left. That could lead Kevin Durant, who reportedly hasn’t spoken to the team since their playoff exit, to force his way out rather than spend a season with whatever Ben Simmons is at this point and a bunch of role players.

In that scenario the Nets would be left with a roster that might not even make the playoffs and very little ability to attract free agents.

Committing a ton more money to Kyrie Irving might not seem like the most appealing move right now, but it just might be the only move for the Nets.