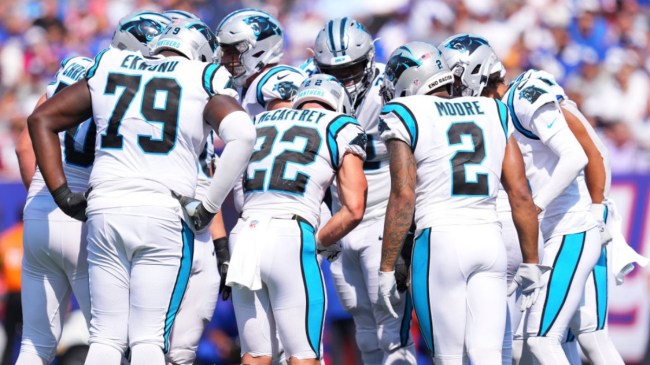 The Carolina Panthers have had a major quarterback problem over the past few seasons. Over those 3 seasons we’ve seen Teddy Bridgewater, Cam Newton Sam Darnold, Baker Mayfield, and PJ Walker start for the team. The results have been the same with each of them. The offense has struggled and the team has lost.

As a result of these struggles, the team has fired Matt Rhule and traded Christian McCaffrey, setting them up to continue rebuilding for the foreseeable future.

It turns out, this rebuild could have easily been avoided. According to a report from ESPN’s Jeremy Fowler, the Panthers’ scouts wanted Justin Herbert, but the team wouldn’t trade up 4 spots to get him.

Carolina Panthers scouts wanted the team to trade up for Justin Herbert in 2020, but they wouldn’t give up the capital

They shot for the stars. They ended up with Teddy, Sam and Baker’

Inside the #Panthers’ three-year quarterback failure and the dubious decision-making during the Matt Rhule era. https://t.co/8wWRim91YX

The scouting department did enough legwork on Herbert to know the other teams that might also be in pursuit. There was a sense of what it would take to move from their No. 7 selection to the New York Giants’ spot at No. 4, jumping the Miami Dolphins (No. 5) and Los Angeles Chargers (No. 6), who were believed to be locked on quarterbacks. Then-Giants general manager Dave Gettleman was a longtime Panthers executive with existing relationships in the building. A trade seemed plausible, but would not be pursued.

Though Carolina’s scouts wanted Herbert, a Panthers front-office source said there was concern that trading draft capital to make it happen could hurt other areas of the team.

Not only did the Panthers have that connection to Gettleman at the time, but the Giants also likely would have been very interested in a move down in that draft. They spent the 4th pick on Andrew Thomas, a tackle that likely would have still be available at pick 7.

We can also estimate what their asking price may have been. They traded back with the Bears for the Bears to draft Justin Fields last year and it cost the Bears their 20th pick, another 1st rounder, a 4th rounder, and a 5th rounder. That trade moved the Bears up 9 spots.

Even if there was slightly more of a premium to move from 7 to 4 in 2020, it couldn’t have been too much more expensive than the 2nd, 4th, 5th, and 6th rounders they’ve given up for Sam Darnold and Baker Mayfield. Even it would’ve cost them a 1st rounder on top of that, getting a franchise QB instead of trying to fix one would have been the right answer.

Instead, they opted to go the cheap route and try to turn quarterbacks that didn’t work out for other teams into their answer at the position. Maybe they won’t make that mistake again in this year’s draft if they get a chance to find a franchise quarterback.