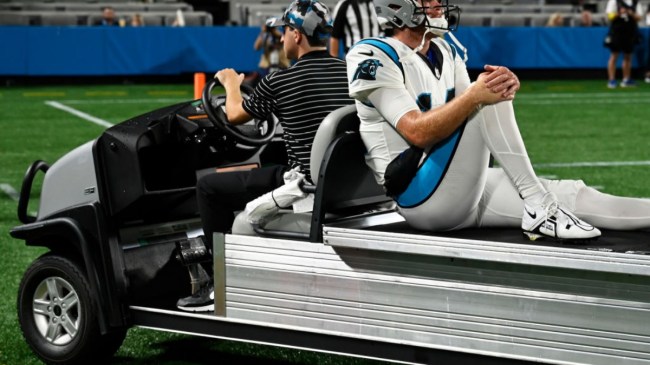 It’s been a rough week for Sam Darnold. The week began with the news that Baker Mayfield would officially be replacing Darnold as the starting quarterback for the Carolina Panthers.

The week ended with Sam Darnold suffering an injury that forced him to leave the team’s preseason game against the Buffalo Bills.

The injury came on a 3rd and 6 where Darnold took a hit as he released a pass and his ankle took an unnatural turn on the way down.

Sam Darnold was taken off the field on a cart after suffering a nasty-looking injury on this play.

The injury was a cause for concern for the Panthers as they waited to learn how long they would be without their backup QB.

Today, NFL insider Ian Rapoport reported that Darnold is expected to miss 4-6 weeks because of the injury.

Sam Darnold is expected to be out 4-6 weeks, sources say. He’ll get a second opinion to be sure. Considering what it looked like, not a bad outcome. https://t.co/t11s5kbEl7

This preseason has been brutal for the health of the Panthers’ quarterbacks. Last week, it was Matt Corral who went down with an injury. His foot injury is going to cost him the entirety of his rookie season.

With Darnold out, it looks like PJ Walker, who seemed unlikely to even make the roster just last week, will be asked to step up as the team’s backup to Baker Mayfield for the first few weeks of the season.

With Baker solidly at the top of the depth chart, the Panthers will be able to give Darnold as much time as he needs to recover from this injury that looked like it had the potential to be much more serious when it occurred.