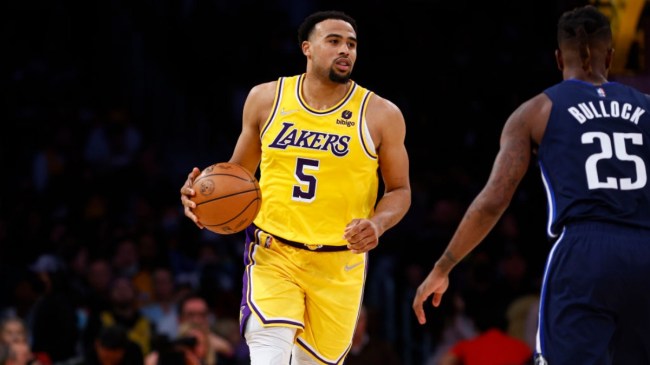 After struggling through their first 12 games, the Los Angeles Lakers have surprisingly won 3 games in a row without LeBron James to run their record up to 5-10.

Unfortunately the news isn’t all good for the Lakers even when they’re picking up wins.

The reality remains that their team isn’t all that great right now and they don’t have many ways that they can hope to improve their roster. To make matters worse a new report has revealed that this didn’t need to be the case.

According to ESPN’s Dave McMenamin, the Toronto Raptors offered the Lakers a 1st round pick in exchange for Talen Horton-Tucker last season.

McMenamin: Lakers had offer to receive First Round Pick + Khem Birch of the Raptors for Talen Horton-Tucker last season pic.twitter.com/rBcaX0Z3CP

I’m told that the Lakers had talks with the Toronto Raptors where the Raptors late last year when it already looked like the Lakers were probably out of it or, at the very least, going to be a low seed and wouldn’t have a likely championship path to go all the way, the Raptors would have traded for Talen Horton-Tucker. Traded a first-round pick.

The deal would have also sent them Khem Birch as the Raptors attempted to shed some salary, but it would have been a major improvement over what they eventually ended up accepting.

The Lakers traded THT for Patrick Beverly during the offseason. The move didn’t make a ton of sense at the time as the Lakers already had a starting point guard in Russell Westbrook and Beverly wasn’t going to offer them much on the offensive end. The move clearly has not worked out for them.

They could have instead had another 1st round pick to offer up in their pursuit of pieces to improve their roster and they might have even been able to land somebody who could fix their shooting issues.

Maybe the Los Angeles Lakers should just be letting LeGM make decisions for them.