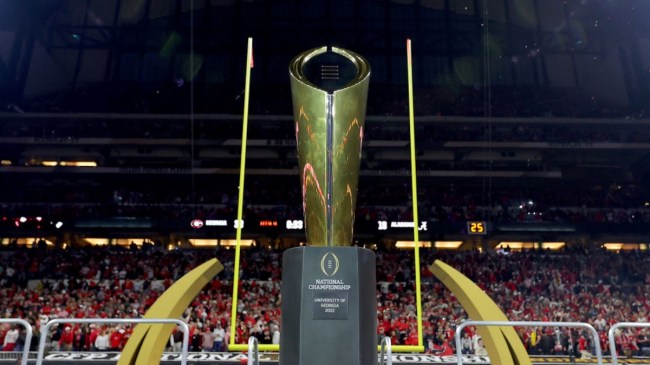 There may have never been a better case for College Football Playoff expansion than this current college football season.

With just a couple of weekends left in the regular season, there are a number of teams with a case for a spot in the Playoff.

Georgia, Ohio State, TCU, and Michigan all remain undefeated in Power 5 conferences. Tennessee has only lost at Georgia. Clemson and USC each only have one loss and could win their respective conferences. LSU has 2 losses, but some strong wins and could be an intriguing case if they beat Georgia in the SEC Championship Game.

College football fans would love to get to see them all battle it out for the national title at the end of the year.

Unfortunately, that isn’t a possibility right now. However, it could be in a couple of years. There have been efforts to expand the Playoff and there are currently plans to extend it to 12 teams.

That could happen by 2024, but according to Sports Illustrated’s Ross Dellenger, there is one thing getting in the way. The Rose Bowl wants a guarantee that it will be played on January 1st every year.

The Rose Bowl—and its New Year’s Day time slot—is believed to be the final hurdle to expansion to a 12-team playoff.

Now, the bowl’s officials have a deadline to agree to expand as soon as 2024, or to hold things off until ’26, explains @RossDellenger https://t.co/fUaTmUMVRq

CFP officials need unanimous agreement from the six CFP bowls to expand the playoff to 12 teams before the contract with ESPN ends after the 2025 playoff. The six bowls are the Rose, Sugar, Orange, Fiesta, Peach and Cotton.

Five of the six bowls support amending the current contract and expanding early. The Rose Bowl has delayed its decision while making a request to CFP executives, something it announced publicly through ESPN in a published story last week.

If an agreement can’t be reached with the Rose Bowl, expansion would have to wait until 2026.

Hopefully this can be figured out soon enough to make the expansion happen in 2024 because this season has proved that college football fans deserve a 12-team College Football Playoff.