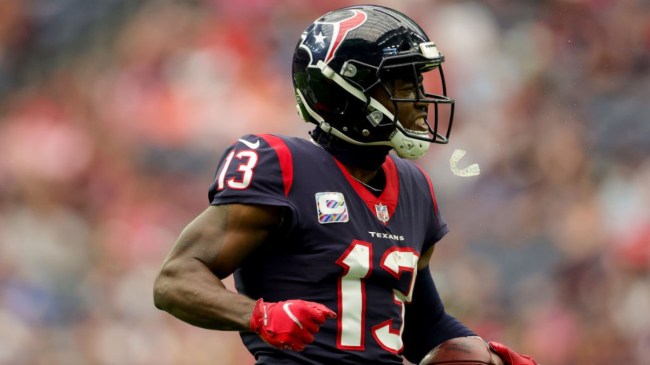 Heading into this week, Brandin Cooks was one of the players that just about everybody was expecting to see traded before Tuesday’s deadline.

It just made too much sense. Cooks is 30 years old, but he has been extremely consistent in recent years, topping 1000 yards in 6 of the past 7 seasons. Meanwhile, the Texans are a mess. They currently hold a 1-5-1 record and their run defense has been absolute disaster this season.

Unfortunately despite these factors, the Texans weren’t able to find a deal for Cooks, something he was not particularly happy about. He hasn’t practiced since and isn’t expected to play in the team’s game against the Philadelphia Eagles tonight.

Today, Adam Schefter revealed some information that made the Texans’ inability to trade Cooks make a lot more sense. According to Schefter, the Texans wanted 2nd and 4th round picks for Cooks.

One of the main reasons Houston was unable to trade WR Brandin Cooks was because it wanted second- and fourth-round picks in return for him, per sources. No team was willing to trade a 2 and 4, and assume Cooks’ $18 million fully guaranteed money for next season.

That was never going to happen. Cooks’ age and guaranteed money were way too big of deterrents for anybody who was interested in trading him. This wasn’t a much lower price than what the Cardinals paid for Hollywood Brown, who is 5 years younger, has a cheaper contract, and was coming off of a 1000-yard season of his own.

24-year old Chase Claypool only got the Steelers a 2nd. The Broncos were asking this same price for Jerry Jeudy, who is only 23.

Thanks to their ridiculous valuation of Cooks, the Houston Texans have put themselves in position to let him go for nothing or allow to continue just sitting out of games.

I thought this franchise was supposed to be better run now that Bill O’Brien is gone.