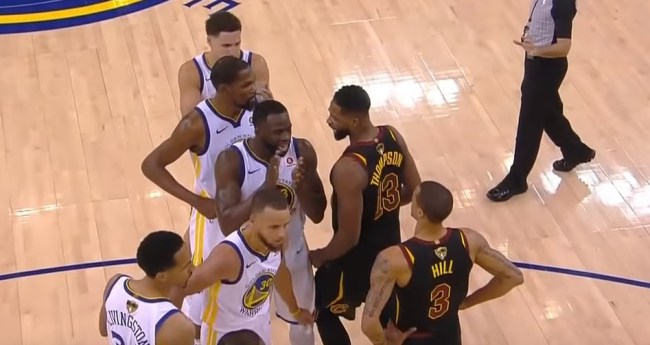 We have a bit more information today surrounding the altercation between Draymond Green and Tristan Thompson at post ESPYS party which was first reported by Bossip. According to The Athletic’s Marcus Thompson, Thompson walked up to Green and sucker punched him without warning at the party.

In what would be best told by the late great storyteller Charlie Murphy, the ‘streets’ turned out to be the swanky Delilah restaurant in West Hollywood on July 18. Both Green and Thompson were guests of LeBron for this ultra-exclusive affair — which prohibited phones and cameras. None of the attendees expected the on-the-court drama to flare back up in this setting.

“Which is why everyone was stunned when Thompson, according to sources, out of nowhere attacked Green.

“No argument. No squaring up. No taking it outside.

“‘It was a sucker punch,’ said one source who attended the party.

Thompson’s beef with Green stems from the NBA finals when Draymond said that he would be willing to meet Thompson in the street following an on-court altercation. Green would then later question Thompson’s toughness in an interview during the Warriors parade.

Update: According to ESPN’s Pable Torre Draymond Green was making Khloe Kardashian and LeBron jokes before Thompson decided to confront him.

What I have learned talking to people that I trust in these circumstances is that Draymond was teasing Tristan Thompson at multiple locations that night. Draymond may or may not been have saying things along the lines of Khloe Kardashian jokes, jokes about how LeBron has left that his career is on the outs.

“uh oh, pablo made some calls about the tristan/draymond fight…” #highnoon pic.twitter.com/9oCpdejTBz

We’ll see if any bad blood carries over to next season.