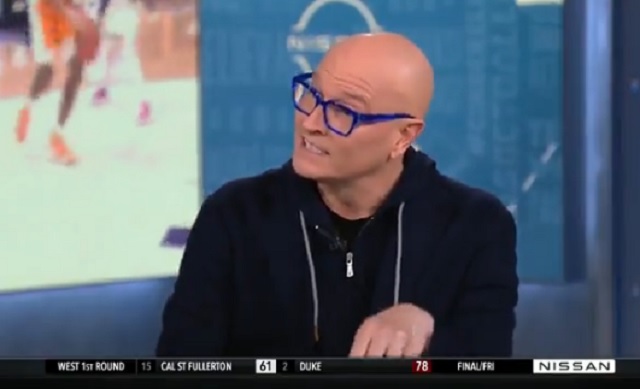 Rex Chapman made a pretty embarrassing mistake while covering this year’s NCAA tournament.

Chapman, who is working for CBS as a studio analyst during the tournament, apparently believed that former Providence head coach Pete Gillen had died and paid his respects to Gillen during Saturday’s March Madness pregame show.

The only problem with Chapman’s comments about Gillen is that Gillen is still alive and actually works for CBS as a college basketball analyst.

Uhm, Pete Gillen is alive and works for CBS.
pic.twitter.com/UZvHsnSMrn

Pete is very much alive

Update: Pete Gillen appeared to get a good laugh over Chapman’s mistake.

Chapman got crushed by college basketball fans over his mistake.

Problem is @RexChapman , is that Pete Gillen is not dead… he does the job your failing at very well for @CBSSportsNet @Gillenhoops #marchmadness https://t.co/oa2OAB9oWF

Pete Gillen does CBSSN analyst work and is probably in another studio in the same building right now https://t.co/pGXWPnEUZ4

If you ever find yourself talking on television, try to keep track of who is dead and who is alive. https://t.co/NdWbp3qP4Y

RIP PETE GILLEN. What the hell. This is embarrassing. Get him off my TV. pic.twitter.com/MsmM5r92FB